“He’s the best physician that knows the worthlessness of most medicines.” – Benjamin Franklin

Like bloodletting and mercury used in Franklin’s day. Like ____ today. You can fill in the blank with many medicines…but let’s look at one class today that I personally think belongs here.

Mostly in this prostate cancer series I’ve focused on diagnostics and surgeries. But of course there are drugs involved too. Finasteride is a drug sold under the brand names Proscar, Propecia and more. It is commonly used to treat hair loss (male pattern baldness) and benign prostatic hyperplasia in men. This one is not approved for cancer, though it has been looked for that.

This is based on the flawed model of “DHT=Bad” therefore let’s get rid of DHT. Finasteride is a strong 5-alpha-reductase inhibitor, meaning an antiandrogen. It stops testosterone from transforming into DHT. As discussed in this article the linear cause of DHT equals hair loss or prostate problems is problematic at best.

Now that’s not to say that this isn’t effective in treating those things. In some cases, it absolutely is.

But there is a cost. There can be disruptive side effects including long term ones even after coming off the drug. Anything where there is potential for long-term damage even after stopping its use is a NO in my book.

Therefore, my non-doctor’s opinion is I absolutely wouldn’t recommend it for these. Just my philosophical stance.

“Over time, it has been considered a safe and well-tolerated drug with rare and reversible side effects. Recently there have been reports of adverse drug-related reactions that persisted for at least three months after discontinuation of this drug, and the term post-finasteride syndrome arose. It includes persistent sexual, neuropsychiatric, and physical symptoms.”

This study includes a handy graphic listing some of the possible side effects. 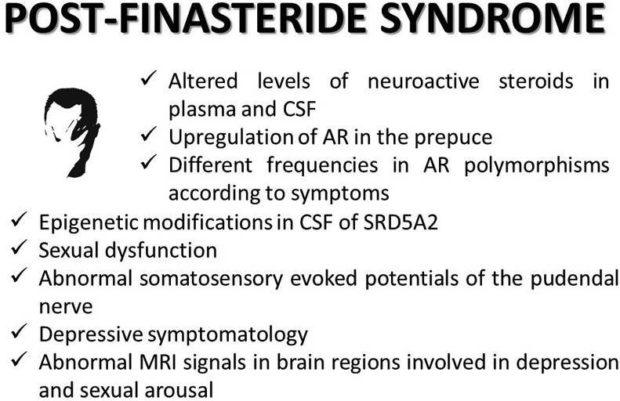 This is because when you seek to reduce DHT for one purpose, since biology doesn’t involve linearly cause and effect, this causes cascading effects across the body. 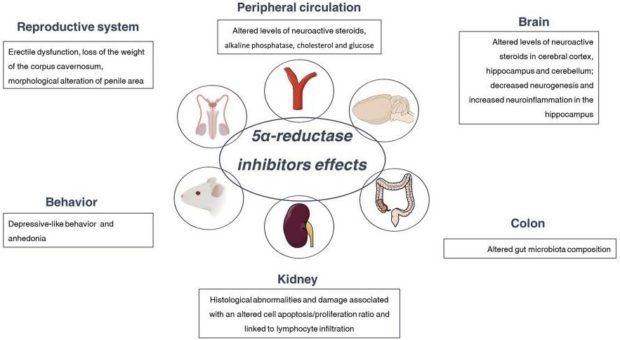 Now, not everyone suffers this of course. There are many changes to anyone that takes this. Whether this manifests as these symptoms or not, is the roll of the dice.

How many do suffer is unclear at best. With the financial tentacles into the industry as described previously, you can bet that this problem is bigger than many claim it to be.

When they looked at it for cancer they found a large meta-analysis “confirms that finasteride significantly reduced the risk of prostate cancer; however, the malignant degree of prostate cancer was increased.”

So it got rid of the non-threatening cancers and helped the dangerous ones to grow! No thanks.

And I’ve heard a few horror stories from our customers, some of which have found us in trying to recover from PFS. Here’s a couple of their comments.

“I took finestride for about 16 years. I stopped taking bit four years ago because I started having sides. Panic attacks, fatigue, depression, and some others. Lot of guys get the sexual sides and others get the cognitive/mental sides and some get both. I had both. I had a strict protocol I did with help of some other guys going through the same thing. I went to multiple doctors like Endo, cardiologist, neurologist to see what was up. All said I was fine. I know alot of guys who took it and we did some research and most had high RT3. Mine was 45 where the range in the high end is 27. Now my RT3 is 23. O would check thyroid. I bet they are off. My TSH is 3.0 now where it should be close to 1. I cycle 23 herbs from Lost Empire Herbs.” – Rob

“This is a side effect that they don’t warn you about. Same goes for Flomax, another prostate drug. BOTH of these medications can also have SEVERE effects on your mind. EXTREME anxiety and depression. so much so that when it happened to me, I thought I was having a nervous breakdown.” – Neil

The good news is that in some cases the herbs can help to mitigate these side effects. No promises, but it is worth trying.

And in the first case, herbs may be a better solution, one with far less side effects, to prostate and other issues. Some that particularly help here includes:

For the sexual effects specifically, Thor’s Hammer is a good one to try out.

P.S. In current news (actually it seems the narrative has shifted from COVID to WW3…) I understand that Finasteride as well as the related Durasteride are being used in the treatment in COVID as well. Besides seeing these listed I haven’t dug into their effectiveness there. My family and I handled our bout with COVID with herbs and supplements just fine.

Latest posts by Admin (see all)