If you want to take your health into your own hands it is good to use testing of various sorts. This gives you some specific information from which you can act on. Over the years I’ve done all kinds of different testing including blood tests (here, here, here and here as examples), heavy metal hair analysis, and more.

Until recently I hadn’t looked at my genes.

The people at MyToolboxGenomics were nice enough to send me a test free. Since then we’ve partnered with them (an affiliate relationship where Lost Empire Herbs earns a commission if you choose to buy) and secured you a 7% off coupon, just enter LEH7 when checking out. By using this link the coupon is automatically applied.

As a health professional I feel it is my duty to share my health results with you. While I’m not going to share the entire 189 page report they sent I’ll share a few details I gleaned from it, some screenshots, and the actions I plan to take.

Obviously, a readout of GCATATAGGC as the genetic code goes… wouldn’t be helpful to anyone. They instead look at the genes that show risks and non-risks involved in various areas according to such and deliver this in a readable form.

For example, here’s the vitamins/minerals summary page on my report. 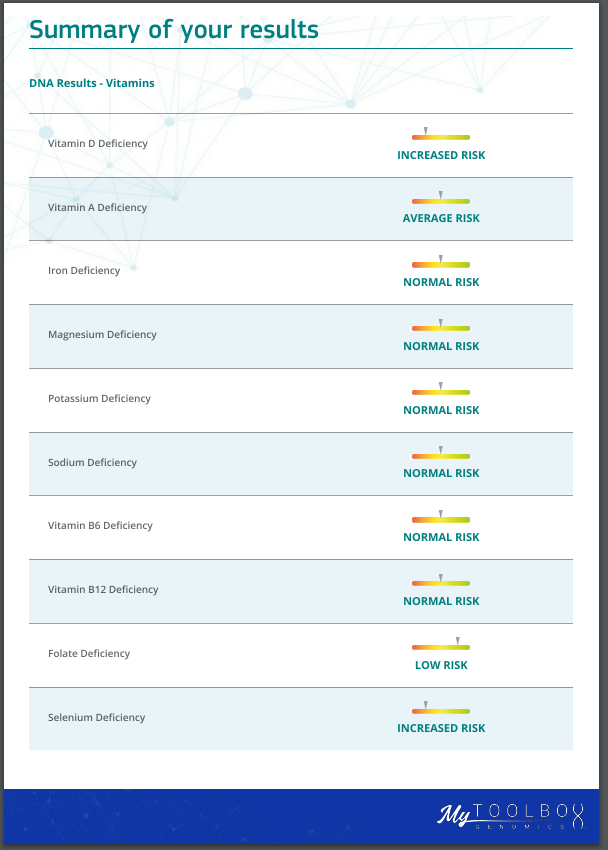 There’s a few things here that stand out for me.

Over the years I tried to obtain enough Vitamin D from the sun alone but wasn’t doing well at that. I now supplement this vitamin (actually more a hormone) pretty regularly, and this gives me even more incentive to do so.

Selenium is something I had borderline low in my hair analysis before. One more reminder to eat Brazil Nuts regularly, especially for me genetically now. Calcium hasn’t been really on my radar, but now it is. 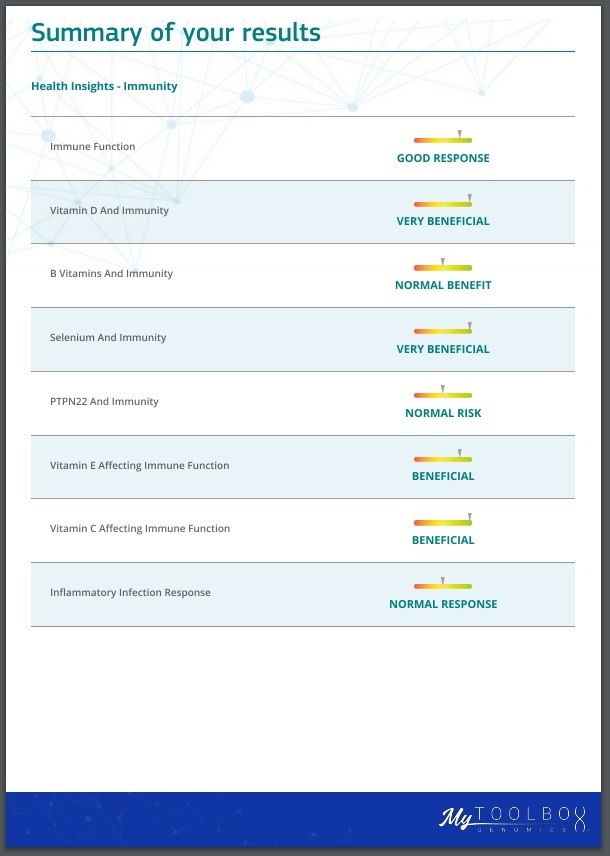 Here’s another page showing that I have good genetic immune function. And specifically, vitamin D and selenium, already important for anyone’s immunity, are extra important for me! So are Vitamin C and E.

Previously I’ve talked about how to not get sick (part 1 and part 2). While I mentioned some of these nutrients there, this gives me additional insight to optimize my immunity further.

What follows is one of the most surprising results… 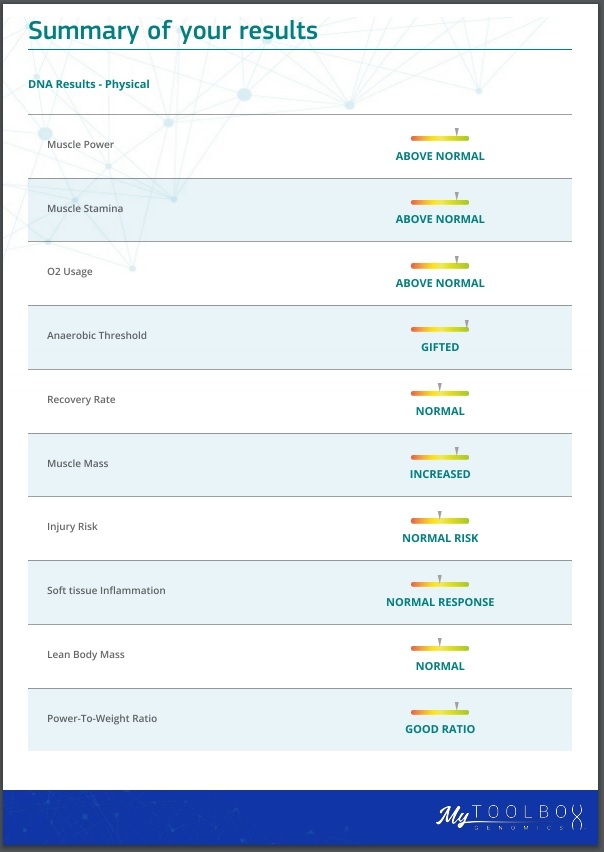 Apparently, I do have decently good genetics for muscle, strength and endurance! This surprises me because I was scrawny, weak and unathletic for the first 20 years of my life.

Increased muscle mass is particularly interesting given the challenges I’ve encountered being a hardgainer.

One of the other surprising results had to do with caffeine sensitivity. According to my genetics, I’m highly sensitive. This was paired with some things showing negative links with caffeine to stress, sleep, focus and gut health.

Some of the results weren’t on my radar at all, but I’ll file this information away in the back of my mind.

There’s much more than this but I just wanted to give y0u a glimpse at what’s contained inside the report.

That’s really all I’m acting on right now with this information. But I’m healthy overall. My guess is that someone looking at correcting some major health issues would find more actionable information inside. There’s a whole lot about diet and losing weight for instance, which I’ve got no issues with.

That’s the thing about genes. They tend to show you stuff for the long-term. Increased risk of a disease genetically, is just one factor. You have many other factors under control. On that note MyToolboxGenome also offers an epigenetics test which I might look at doing. 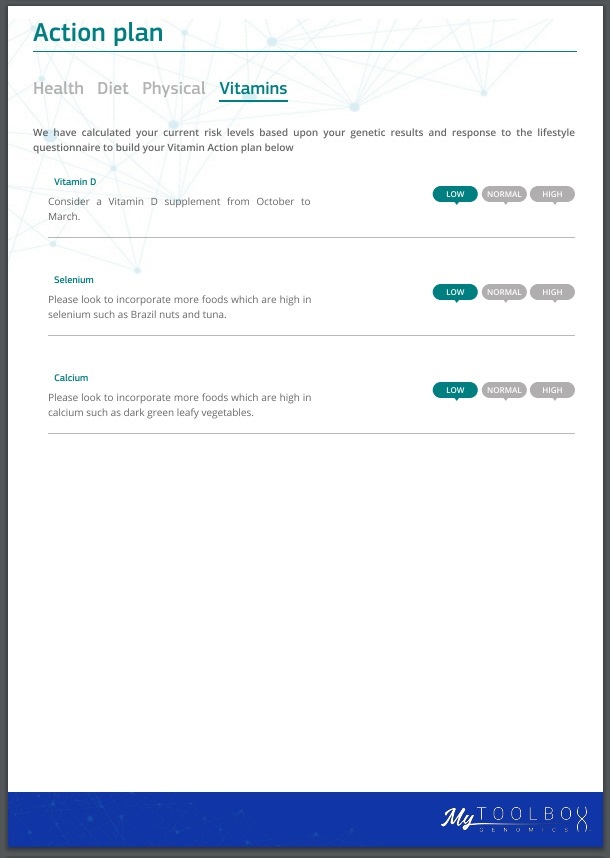 Here’s one page of the Action Plan page from the report.

About Doing the Test

The test is super easy to do. It’s just saliva. Spit into a tube and ship it off.

Then you wait a few weeks to get the results back.

I’ll admit, there was one thing I didn’t like. This requires a smart phone to be able to use. You have to scan a QR code and login through the app. Not a big problem, but I personally don’t like to use apps all that much, much preferring to operate on my desktop computer. 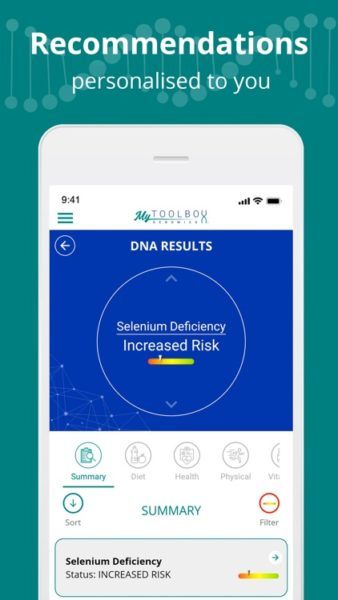 Other than that I have no complaints about this service and would recommend it to anyone that wants to get the genetic perspective on health for themselves.

Once again, you can visit MyToolboxGenomics’ website here and get 7% off any test.

I know that some people don’t want to do genetic testing for fear that others can acquire this data and do nefarious things with it. In my opinion, it is a valid concern.

Based on some of my other writings, you might be surprised to hear I did this test.

Well, I’d turned in my DNA previously before I was aware of these concerns. I did Ancestry.com a while back. (Which just got bought up by Blackstone, related to Blackrock which is now managing Federal Reserve bailouts. What does that mean? I don’t know, but it is interesting.)

Another factor I’ve thought about, is if they wanted my DNA it wouldn’t be that difficult to acquire it. I leave my long hairs all over the place.

All this being said, MyToolboxGenomics is a small company. I read through their Terms & Conditions and felt confident in that you can delete your data from their database.

Overall, I weighed the risks and benefits and felt that knowing some more info about my genetic blueprint would be of greater value to me. You are free to make your own choice.