For years, I had heard about ayuhuasca. And from the very beginning it was something I knew I wanted to take part in. However, if I was going to do it, I wanted to do it right.

Ayuhuasca is highly revered by the cultures in which it originates, where it is better known as natem. Because of its capacity for transformation its popularity has spread far and wide. And this was a double edge sword. On the one hand more people sought out the medicine and had it touch their lives.

On the other hand, it was misused by others. The worst I’ve heard is that at the Peruvian airport you can see people holding signs offering ayuhuasca ceremonies. And these unscrupulous people have then robbed and raped people.

Anyone can claim to be a shaman. That is far from a licensed profession. And how would anyone from the West know the difference, anyway?

So, as I said, if I was going to do it, I wanted to do it right. To work with a legitimate shaman that had been practicing for years and to do it in the place where ayuhuasca comes from. This isn’t to say that a ceremony in San Francisco can’t be good, I just wanted to go as authentic as possible.

And so, in my journey to the rainforest, the opportunity was available. 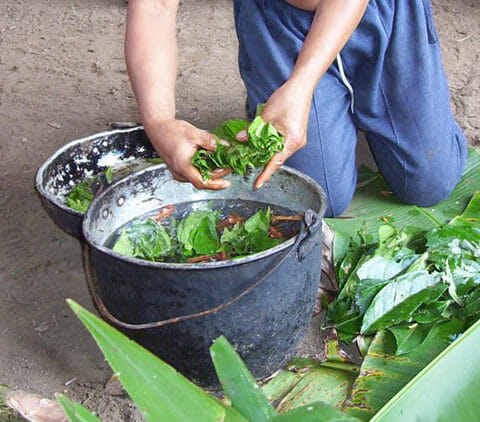 I heard so many amazing stories from different people. Ayuhuasca effects everyone differently. And these stories ranged from the harsh (purging from both ends all night) to amazing visions and talking with the spirit of ayuhuasca. Whatever was to happen, I thought I was ready for it. I was ready for my life to be changed in some way.

When you first meet your shaman and he’s wearing an IBM shirt you have to laugh. These people live in their cultures fully, yet small things like this act as reminders of how our cultures have interacted.

I was excited to learn that our shaman was the one that had originally spoken those words, “If you’re coming to help us you’re wasting your time. If you’re coming because you realize your salvation is tied into your own, then let us work together.” This idea is what started the Pachamama Alliance over twenty years ago. When I first heard it, it sent shivers across my body.

The entire day was spent fasting. When we arrived at the shaman’s village we set out on a long hike. During this journey, we took the time to sit individually in the forest and be with nature. Our destination was a sacred waterfall where we snuffed tobacco and set out intentions for the night to come. 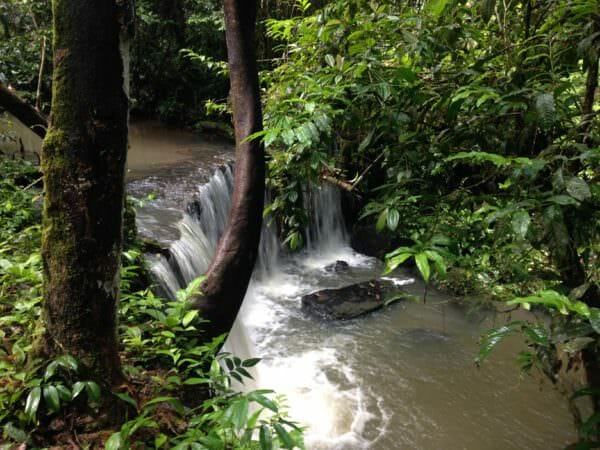 Returning to the village we waiting until nighttime came. Ayuhuasca increases your photo sensitivity, even helping you to see in the dark, so it is not done during the day time.

Finally, the time had arrived. We sat in a circle around the shaman. The ayuhuasca had already been brewed and awaited us in a plastic soda bottle. One at a time we sat in front of the shaman as he chanted and whistled into the cup. When he was done, he handed it to us and down the hatch.

I had heard stories of how awful ayuhuasca tastes. Yet being used to some powerfully bitter and bad tasting herbs like tongkat ali and reishi, I have to say it wasn’t that bad. Not an enjoyable taste, but not the worst thing ever.

I sat there and wondered. Was it starting to come on? My body felt…something. My eyes were playing tricks on me.

After the whole group had drank we were invited to go lay down on our banana leaves under the stars. These were laid out in a large semi-circle around the hut, with plenty of space between people. Ayuhuasca is not a social drug, instead you’re meant to be involved in a personal journey.

Figures appearing in the clouds above. But that happens normally when I stare at clouds, right?

After a short amount of time we’re invited to drink a second cup if we so choose. I do so, feeling something but not quite “there” yet.

Our group had about ten people doing the journey. We also had helpers that were not taking the ayuhuasca there to lend a hand to those who were. Off in the distance I can hear the others beginning to purge.

I wait and I wait. It seems everyone else is purging. I notice some nearby people can’t even walk themselves and need to be almost carried to the shaman for his cleansing.

And I wait. Time is hard to tell waiting under the stars. My body still feels that something but I’m not seeing anything spectacular. I begin to get frustrated. Why isn’t it working? I am let down. I’ve come all this way, waiting years to do this, and it doesn’t affect me. Anger rises and I try to let it go. I wanted to see something like this! 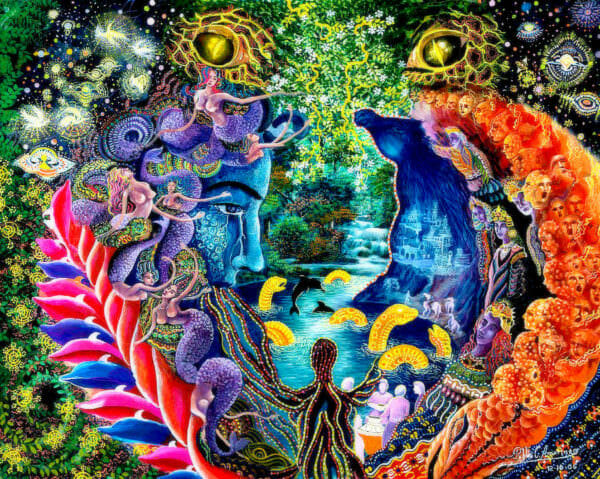 I get up and walk around. Most everyone else is partially paralyzed it seems. I think to myself I could do a backflip right now (not going to but I could).

Finally, a little nausea comes on. I try to make myself throw up but this is unsuccessful.

Maybe two hours has past. I talk to one of the helpers and say let’s do a third cup. Mind you, no one else had drunk a third cup. Everyone else just had one. And one other guy, twice my size, had two.

I sit down with the shaman once again. He begins his whistling. Suddenly I am overcome with incredible nausea. I pause for a moment, thinking can I hold this in? No. I turn to the helper and say I need to vomit. He points to a spot a few paces away and I stumble over and let it all out.

Well, at least that finally happened.

After I am finished I notice the shaman is still whistling into that cup. I’m not sure of what the protocol is at this point. I sit down in front of the shaman and soon enough he hands me the third cup. Down the hatch.

Back to the banana leaf. Part of me is worried/hopeful. Often I have heard the visions come after purging, but after some more time I figure it’s just not going to happen for me.

I’m fascinated by the jaguar sounds the shaman is making. He’s working on someone and something. The growl emanates from deep inside his throat, and always ends the same, with him spitting onto the ground. 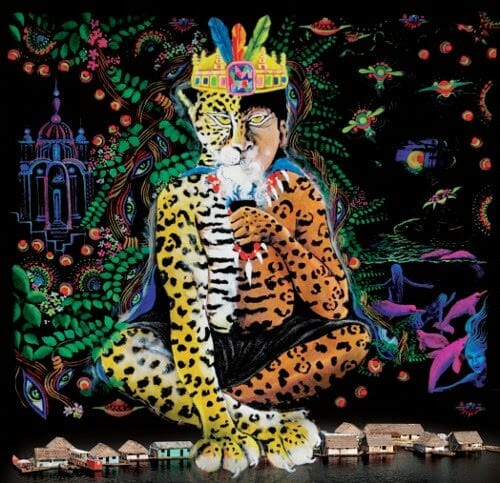 By this point I’m pretty tired. My thinking at this point is that, for whatever reason, my ayuhuasca journey was meant to be entirely somatic. I’ve certainly been feeling things throughout my body, and I did purge. Perhaps the visions only would have gotten in the way of the medicine. My conscious mind wasn’t to be entertained, everything would take place in the unconscious.

Waiting can be exhausting, so I head indoors. Indoors was the shaman’s hut. Unlike most of the Achuar people he did have walls on his house. This was a defensive measure as at one point he was the target of an assassination attempt.

But our beds are simply banana leaves on the ground, though here we have mosquito netting around. I drift off into uncomfortable sleep, waking up once to head outside and dry heave heavily. And waking a second time to finish the deed more fully.

I don’t recall any dreams that night or morning though I’m sure they occurred. At daybreak, we begin to arise. We weren’t supposed to talk about our journeys until later, but after that what else are you going to talk about?

After breakfast, we reconvene in the shaman’s hut for him to interpret our visions. The process is lengthy as we first speak in English, it’s translated to Spanish, and finally to Achuar. And then the reverse.

One after another my group shares their visions and receives insights into them. When my turn comes, I share something much like you just read, of course, pointing out that the shaman was there so he saw some of this.

Although my story was quite short in comparison to the others, the shaman spends more time speaking than in the others. In a nutshell, he says that my expectations were too high and that I had somehow messed up the instructions at the waterfall the day earlier.

When I sat down for that third cup, he tuned into the spirit of the plant to see if it was with me. It definitely was and that’s right when I got nauseous.

He also said that I had visions, powerful visions, that I just don’t remember them.

And what he saw was the whole forest talking to me.

Plus, at some point (spiritually not physically) I came up to him, shook his hand and said I wanted to be friends.

Quite naturally, this changed my whole viewpoint on my journey and I would continue to contemplate it for some time. Considering ayuhuasca is the shaman’s realm I believe its suitable to take his viewpoint with at least equal weight as my own.

What came next was quite surprising… (The next part of the story coming next week.)