Medicinal mushrooms are some of the strongest “medicine” out there. Yet unlike drugs, many of them have a dual-direction activity that can boost or decrease your immune system as needed; an all-natural immunomodulator. In addition, there are many other benefits besides helping immunity and cancer.

A few years back at the Longevity Conference the keynote speaker was Paul Stamets. Paul is the world’s foremost mycological expert. From the stage he spoke of the benefits of mushrooms, not just in how they can help us individually, but also to help heal the world. 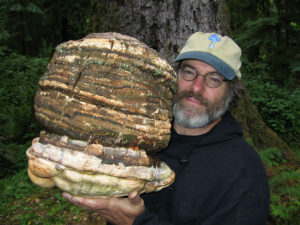 He also wore a cap made from Fomes fomentarius, also known as the Ice Man Fungus, which can be pounded down into a felt-like material. How cool is that? I would wear one!

Stamets told a personal story about his mother who had gone through cancer. This was only a few months after I and my brothers lost our mother to breast cancer. The difference was that Paul Stamets knew the power of the mushrooms.

Several of them are well-research for their cancer-fighting properties. One of them he talked about is Turkey Tail, Trametes versicolor and how he gave this and other mushrooms in high doses to his mother. The difference was that she survived cancer!

I shed a tear or two during his speech. Although it was too late for my own mother, at least I would have this knowledge to help others for the rest of my life.

If I was diagnosed with cancer the very first thing I would do is to start taking tons of medicinal mushrooms each and every day.

When I returned home from that conference I went on a hike with the purpose of finding mushrooms within the local forested area. 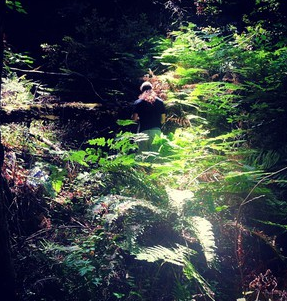 An important thing I had learned was that you MUST be very CAREFUL when it comes to mushrooms that grow on the ground. Some of these are poisonous and even deadly. And it can be tough to figure out the difference.

But when it comes to mushrooms grown on trees its much simpler. First of all, the majority of medicinal mushrooms are those found growing on living or dead trees.

There are some medicinal mushrooms found growing on the ground like Agaricus blazei, but that is the exception, not the rule.

Secondly, there is only one poisonous tree mushroom, the Jack o’ Lantern. This one is easy to spot because it glows in the dark! 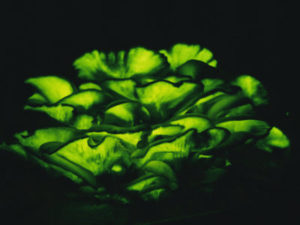 The only poisonous tree mushroom, the Jack o’ Lantern

Thus, mushroom hunting can be done safely if you know this little bit of knowledge. Still it is best to do additional research from the real experts like Paul Stamets to be extra safe.

On my first trip mushroom hunting, I located about 7 or 8 different varieties. I searched online but couldn’t identify any of them…except one.

What was growing just a couple of miles from where I lived? Turkey Tail! 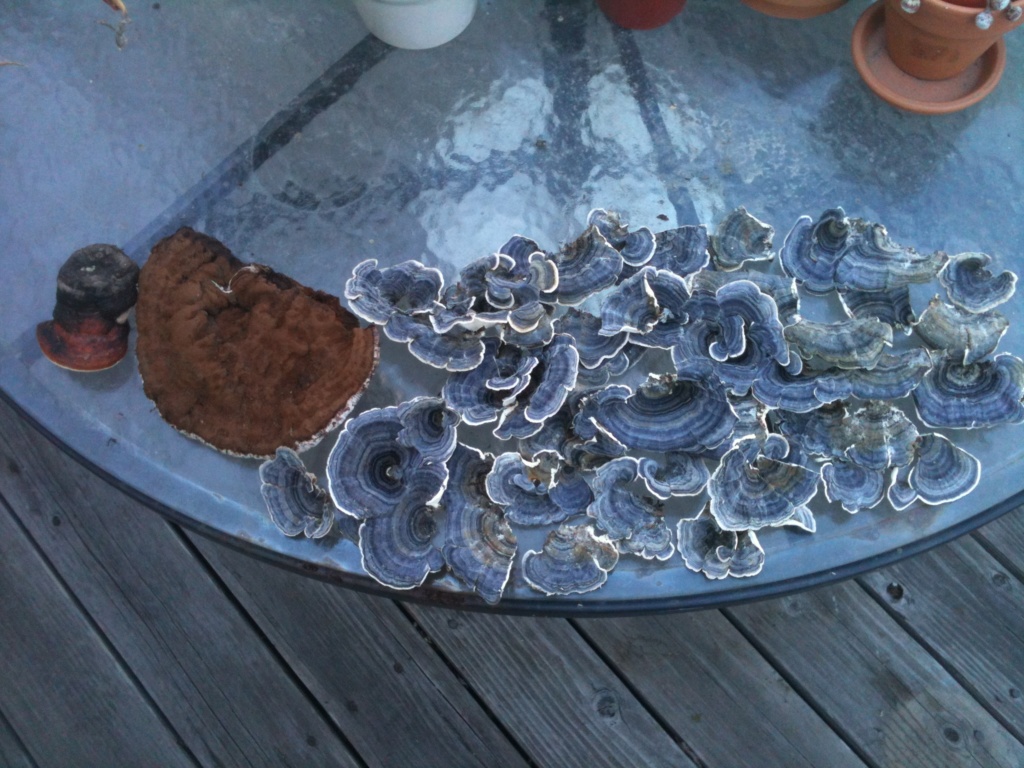 Turkey Tail is on the right. A couple unidentified tree mushrooms on the left.

Just recently, I went hunting mushrooms again looking specifically for this one again. The picture above shows what I found on this trip.

An interesting thing to note is that the brown mushroom on the left had just released its spores as it and the surrounding area where I had found it where covered in a brown chalky substance.

I threw these mushrooms into a tea which I drank the following couple of days. 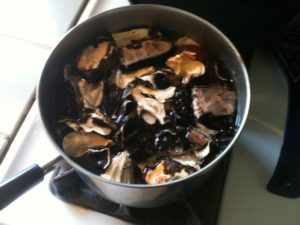 My mushroom tea brewing on the stove that night.

I also created a tincture which is still sitting in my closet which I will have for later.

Now I realize that not everyone can nor will go mushroom hunting. But you don’t have to to get the benefits of these amazing herbs like reishi.

If you enjoyed this article please like it and leave a comment below and we’ll have more information about Agarikon mushrooms, Paul Stamets and cancer in the future.