Cordyceps sinensis has quickly become one of the most popular adaptogens available. Its benefits range far and wide. Although this mushroom has been around for quite some time, it is now in high demand for its exceptional immune boosting qualities, lung support, and ability to support both yin and yang deficiencies.

All Cordycep species are quite unlike regular fungi – as anyone who is aware of these mushrooms know, they are unique in how they grow and thus have special properties that other mushrooms lack.

Of course, there are many benefits we could delve into, we are going to spend a little time focusing on one of the main compounds in these rather interesting mushrooms (including that of Cordyceps sinensis and Cordyceps militaris).

Cordycepin (3′-deoxyadenosine) is a nucleoside derivative isolated from Cordyceps militaris and a transcription chain terminator. 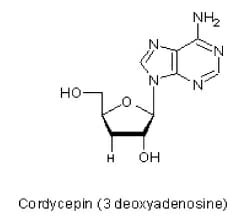 Some of the most intensive studies on cordycepin are about its ability to aid in reduction of tumor sizes in cancer patients. [2]

You can imagine that such claims will have brought on a whole landslide of research regarding how it can help fight cancer.

One study indicated that several patients who continuously took a level dosage of Cordyceps sinensis daily showed vast improvements in their lung health. [2]

With such research, it is no wonder why this compound is highly desired. Cordycepin has been produced synthetically as an isolated compound to see if its effects on cancer cells and tumor cells are just as potent or if it does not carry as much as an effect as it does when working with coenzymes and cofactors found within the various species of Cordyceps.

Enough studies have been done to steadily note that the synergistic effects of Cordyceps polysaccharides, adenosine, cordycepic acid, and cordycepin would be far greater than those achieved by the use of just cordycepin as a standalone supplement. Hence, the benefits of taking cordycepin where it naturally occurs (like in Cordyceps militaris) far outweigh isolated extracts of the stuff.

One study in particular indicated that Cordycepin has displayed cytotoxicity against some leukemic cell lines in vitro. There are current, ongoing studies and clinical trials of cordycepin as a leukemia treatment. [3]

Currently, the National Cancer Institute in collaboration with a pharmaceutical company has initiated a Phase I clinical study of cordycepin as a potential treatment agent for cancer. [4]

Cordycepin has many intracellular targets, including nucleic acid (DNA/RNA), apoptosis and cell cycle, etc. Investigations of the mechanism of anti-cancer drugs have yielded important information for the design of novel drug targets in order to enhance anti-tumor activity with less toxicity to patients.

One study looked at cordycepin’s effect on liver cells. The result of the study indicated that both cordyceps acid and cordycepin together do indeed ameliorate the inflammatory and fibrogenic response of cultured HSCs (liver cells).

This is linked to its ability to promote DNA repair and reduce free radical damage.

The researchers therefore concluded that “these effects may contribute significantly to [its] therapeutic mechanisms to inhibit and resolve liver fibrosis. [5]

Cordycepin may also help reduce the risk of chronic liver conditions, including hepatitis. Several studies have indicated that it protects the liver – even if it’s been severely damaged by disease. 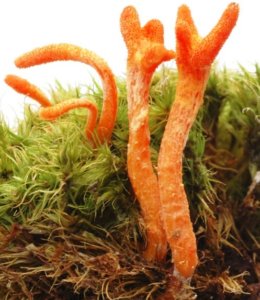 One such trial that involved 33 patients who had hepatitis B and another 8 patients with cirrhosis. These patients took cordyceps supplements and showed 71.9% improvement on the thymol turbidity test and 78.6% improvement in the SGPT test, both of which are designed to test the functioning of the
liver. [2]

There are numerous studies coming out regularly regarding the massive amounts of health benefits of Cordycepin aside from its positive effects against cancer and shrinking tumor sizes.

Some of the other main benefits that this compound provides are:

Through the limited research touched on here, it can be concluded that the benefits of Cordycepin are immense and this compound is gaining much recognition even in the pharmaceutical world as a positive alternative to aid in the treatment of leukemia, shrinking tumors and causing cell death in cancer cells.

The amount of progress with medicinal mushrooms in modern science is ever escalating and is showing just how magical these fungi are. Gain these benefits and more by grabbing a bag of Cordyceps here.