I love science…when it is done well. Unfortunately, science is so often influenced to result in desired outcomes. And I think it is my love of the scientific search for truth that led me deep into recognizing its many flaws. But that’s not what I want to talk about today.

Science is just one perspective we can take of the world. I like to do this in addition to looking at traditional viewpoints, clinical practice, even anecdotal evidence. For many herbs we really don’t have much science, so we must rely on the other perspectives to guide us.

But some herbs have a decent amount of scientific study done on them. Last month a systematic review was published on Ashwagandha, meaning a study that looked at all the studies that have been done.

This review ended up looking at 41 studies done with human populations. These trials were spread across a wide range of purposes and functions as can be seen here. 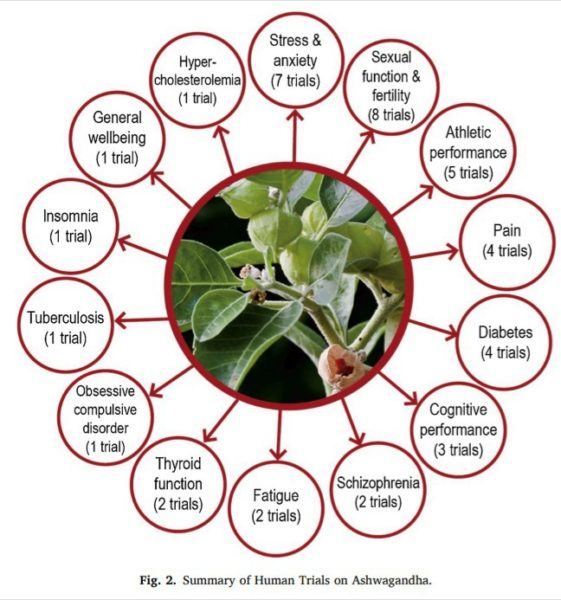 Everything from athletic performance to insomnia, stress to thyroid, even tuberculosis and schizophrenia.

This is in stark contrast to the “one disease, one drug” model so common in modern medicine. As this systemic review shows, Ashwagandha has systemic effects across the body.

Of course, Ashwagandha can’t cure anything. Instead, healthy people should take it to be even healthier and to perform as better humans.

Of these trials a number of them looked at specific biomarkers in saliva or blood. That’s shown in this chart. 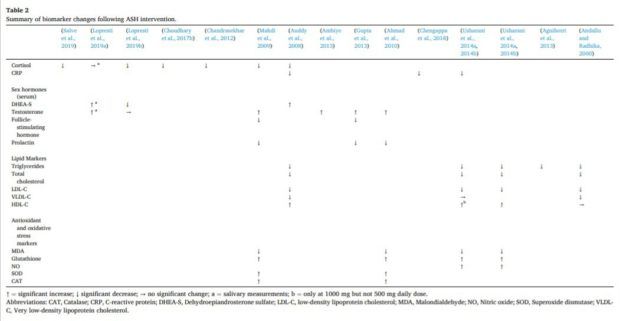 First of all, cortisol goes down in six of the seven trials (a non-significant change in the seventh trial). Cortisol is known as the “stress hormone” and in general people have too much of it. And this is probably the most well-researched and known effect of Ashwagandha, helping to deal with stress.

As so many people say when they take it, stressful events in life just don’t seem to impact them the same way when they’re on Ashwagandha.

Turning to the sex hormones, testosterone is raised in five out of six trials. This may be as simple as the fact that cortisol and testosterone tend to be inversely correlated. Less cortisol generally leads to greater testosterone.

There are mixed results on DHEA. And some decrease across follicle-stimulating hormone and prolactin.

Let’s move on to lipid markers. Across the board, less triglycerides, total cholesterol, LDL and VLDL (the “bad” cholesterols) and increases in HDL (the “good” cholesterol).

Without going too deep into how all those work, this shows that Ashwagandha can help support metabolic health.

Some of the conclusions inside include:

“A review of the effects of ashwagandha on physiological biomarkers measured in human trials suggests it may have cortisol-lowering, anabolic, androgenic, anti-inflammatory, and antioxidant effects. There are also several studies suggesting it may influence lipid metabolism.”

“Ashwagandha may also influence mitochondrial activity which could account for its wide health effects including its postulated positive influence on exercise performance.”

“Overall, the results from this systematic review suggest ashwagandha has a potentially large array of therapeutic applications.”

As with all science, the authors address the many limitations involved in these trials as well as suggest future lines of research. And since I’m so critical of looking at conflicts of interest involved in drug science, it should similarly be looked at with herbs. The authors report no funding support for this study, though they have “received funding in the past to conduct clinical trials on ashwagandha and other herbal and nutraceutical ingredients.”

I think this systemic review is another arrow in the quiver of herbalists showing that Ashwagandha rightfully earned one of the top spots in Ayurvedic medicine. With the chronic stress of modern day lives, it’s likely even more important today than centuries ago!

Still, regardless of a systematic review “proving” the positive effects of an herb, what really matters is whether or not it works for you.

And the only way to find that out is to try it.

Ashwagandha is a very well tolerated herb that works for most people that take it. But nothing works for everyone.

It’s one that I personally keep in the rotation for myself. What about you?