“I’m a huge fan of the tinctures from Lost Empire. They have been part of my daily routine for almost a year now. I recently found a holistic Dr claiming alcohol can be an endocrine disrupter. Can you point me to research that confirms or negates that claim? What type of alcohol is used in the tinctures? Thank you for your help!”
E.K.

The one exception is Stag Swag which currently uses corn alcohol.

Now, onto the endocrine disrupting effects of alcohol.

The short answer is that yes, alcohol disrupts the hormones. However, this is dose-dependent and frequency-dependent (as in acute and chronic alcohol use is different).

In other words, that’s from actually drinking alcohol. The amount you get from taking a tincture will be very small, and thus any effect would be really small as well.

Some people are super sensitive to alcohol and choose to avoid tinctures for this reason. But based on the data the amount of alcohol in using tinctures is not really going to cause systemic impacts because it is too small.

Recall the old adage of the difference between a medicine and a poison being dose.

It always feels great to stumble upon something like this chart I found in Effects of Alcohol on the Endocrine System by Nadia Rachdaoui and Dipak K. Sarkar. 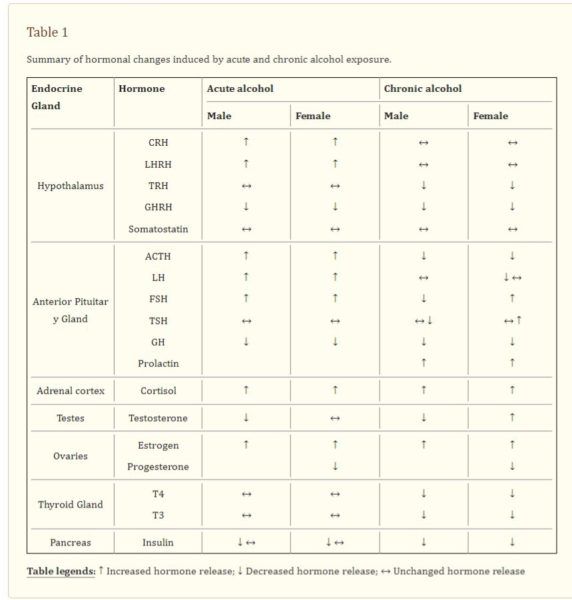 They summarize the whole paper with these two points.

“The effects of alcohol on endocrine function are multiple and complex. Several variables, including the type, length, and pattern of alcohol exposure; level of intoxication; and coexisting medical problems, such as malnutrition and liver dysfunction, must be considered when assessing the impact of alcohol on hormonal status.”

Of particular interest to our male readers focused on testosterone health is this. “Diminished sexual function in alcoholic men has been clinically noted over many years; early studies largely attributed this problem to liver disease. However, when young, healthy, non-alcoholic volunteers were exposed acutely to alcohol, a fall in serum testosterone was consistently demonstrated.”

And for women, “Even moderate drinking in healthy women can lead to significant reproductive problems…Menstrual problems did not appear to occur in the women who were occasional drinkers or who were moderate drinkers consuming fewer than two drinks per day. A dose-response relationship appears to exist between alcohol consumption and the frequency of menstrual problems.”

So how should you go about using this information?

If you have your hormone tests handy, and you’re a regular drinker, look at the chart above. Match up anything that might be too high or too low according to your test results.

And then if you want to change it, lay off the drinking. Test once again and see your results.

Again, the doses used in a tincture, even if you’re using multiple each day, just isn’t going to be sufficient to cause any of these sorts of effects, at least in the majority of people.

Nonetheless, it is important to understanding what drinking alcohol in general can do to your hormones and much else.