Although that is its primary use, the truth is this herb does quite a bit more than just that. Known as Yin Yang Huo in China this plant has been used for thousands of years. 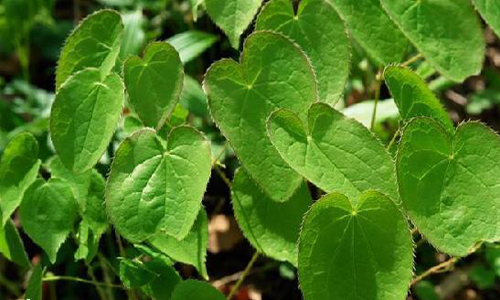 The so called “active” constituent of epimedium is icariin, a unique flavonoid. What is special about this molecule is that it is a PDE5 inhibitor. That probably doesn’t mean much to you until you know that this is what the various Erectile Dysfunction drugs are too.

PDE5 is an enzyme that breaks down the result of nitric oxide with cGMP pathway, causing the erectile tissue to lose its blood flow.

While some people extract just the icariin out of this plant, turning it into something akin to these drugs, we provide a full plant extract. Ours is not standardized, but has roughly 1-3% icariin. If you’re looking for a 40+% icariin, that’s not what we carry or recommend. Don’t take this expecting the same exact effects of the little blue pill or similar drugs. It is an herbal extract not a drug.

But perhaps it can restore your own body to a healthful, more vigorous level. Epimedium has been shown to not just work on NO in the moment but also up-regulate genes associated with nitric oxide production in ways that other PDE5 inhibitors do not.[3]*

Because of its Yang nature this herb is mostly used by men, but can certainly be used by women too. Like other herbs the dosage is often cut in half. For best effects it is also combined with yin bedroom natural performance enchancing supplements.

It does contain phyto-estrogens, Icaritin and Desmethylicaritin, which were shown to raise the levels of estrogen in post-menopausal women.[14]*

Based on lots of men taking this natural performance supplement for positive performance in the bedroom effects, I don’t think these phyto-estrogens are going to raise your estrogen levels or decrease male hormones in any way. One study with men found no estrogenic activity [15]*

We have a 10:1 Water Extract available of Epimedium grandiflorum. Roughly 10% non-GMO corn maltodextrin is used to make this powdered extract from the liquid extraction. This is far from isolated icariin as some other companies sell.

The recommended dose is 1/2 to 1 teaspoon which is 2-4 grams. Some people like to take it 30-60 minutes before intercourse.

Other people will find better results when they take it daily for a few weeks. The same dose of 1 teaspoon per day can be done.

Contraindications: Not for use with those with yin deficiency with heat signs. Can also be drying. 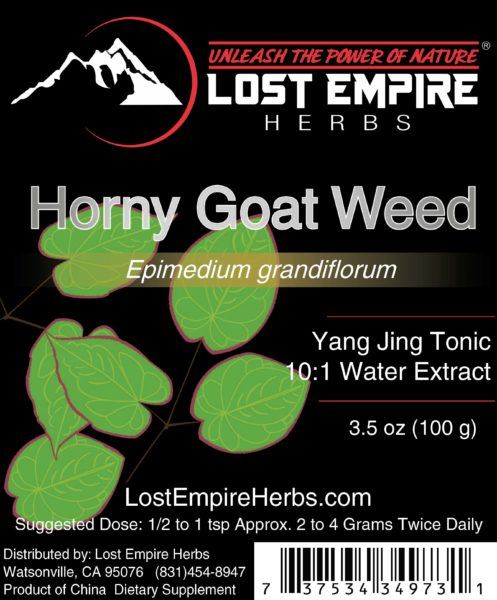 Can women use horny goat weed?
Yes. It works great for women for the same benefits as men take it.
Can young people use it?
While it is generally used for older people, if younger people need it they can use it too. Not recommended for kids.
Does this work instantly?
It depends on what you mean by work. I’ll assume those asking this question are talking about the sexual benefits. Some people may notice benefits right away. Other people may need to be taking it daily for a month before they notice benefits. Still, others may not notice benefits. Everyone is different, which is why we recommend you experiment. Only you can know by trying it, and that’s also why we offer a 365 Day Money Back Guarantee.
How long does it last once it kicks in?
Again, this does NOT operate like certain ED drugs, so don’t expect it to.

Side Effects and Interactions:

Question not Answered?   Click HERE to Submit your Suggestion!