This article is long past due, but I felt it still should be written. Partly because of the tax write-off benefits for taking the test but mainly because it can show just how some simple actions can influence your insides.

This article covers my second test with InsideTracker.com. My latest test took place on March 28, 2017, almost a full five months since my previous blood tests. Since my first blood test, I added additional test results that came from tests my doctor independently ran on me to make sure my creatine kinase was okay. Initially, they tested at the extremely high level of 4,519 U/L! Rather unsafe! To put that in perspective, eight days later my levels were back down to the optimal zone of 106 U/L.

I mention this because my pictures will show three reference points on the tests even though I have only tested with InsideTracker twice. That is what InsideTracker is all about, tracking your blood test results, even if they come from your doctor. If you even only did it once a year, having a visual makes it incredibly worth it in my opinion. That is something a doctor has never provided in my experience (though I am sure plenty that do nowadays).

All-in-all, my tests results significantly improved as will be seen.

But instead of reviewing EVERY single result, I will just highlight some of the more notable ones.

So to begin, I need to specify that the first test I did in my last article had only 11 biomarkers. This second time, I went for the Ultimate Package, way more expensive but you receive a total of 41 biomarkers. What my initial test showed was that I had 4 of those biomarkers in the needs work range, and 4 in the at risk range as shown below: 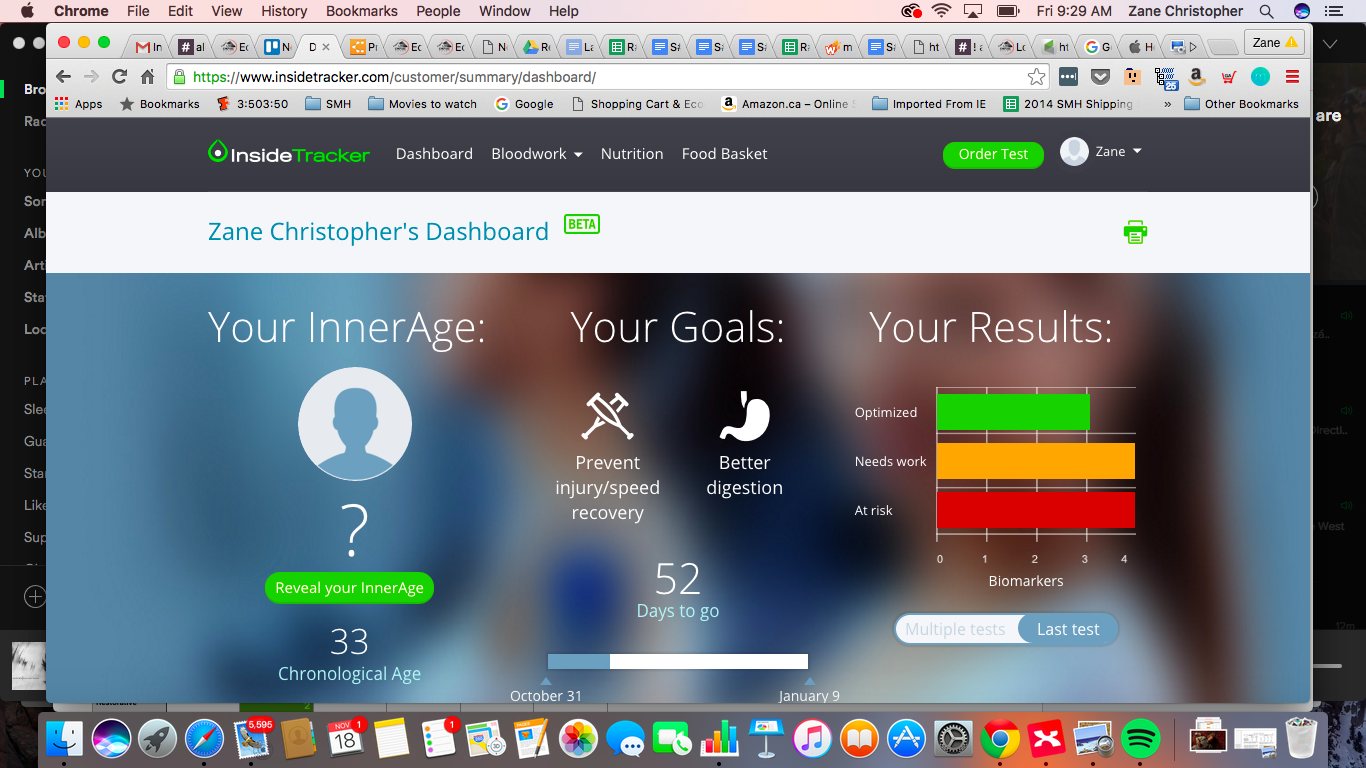 They’ve made some improvements to their system since that first test but, even considering all the other biomarkers that I am now writing about, I have zero at risk biomarkers and eight need work biomarkers as shown below: 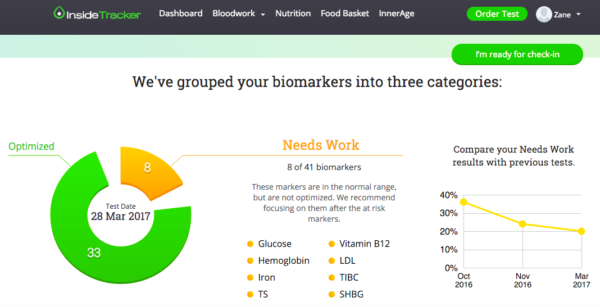 Zero at risk markers out of 41 biomarkers. That is always a beautiful thing! I am way to young to have adulting health issues.

You will notice what my problem areas are, but before we go into any of those, I would like to talk about how I boosted my vitamin D levels from at risk to optimized in the middle of the wettest winter in Southern California in 122 years of record keeping.

Here are my results: 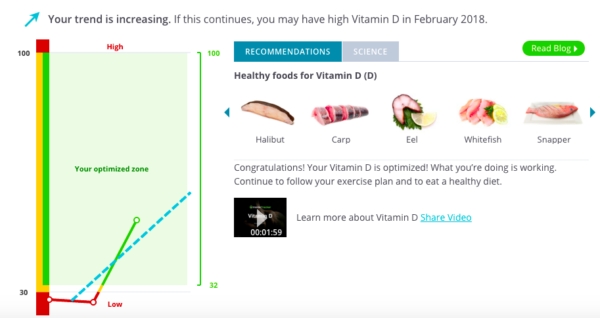 This hormone-vitamin is more vital to our health than many people care to admit. Unfortunately for our society, most of the nutrition science done on it is wildly inaccurate concerning the amounts we need and how exactly we should get it. Food is a great way to get one form of vitamin D. The kind received by sunlight though is not the same as that found in food. That means you require both for normal physiology processes!

Did you comprehend that? I will repeat it because this is of vital importance to understand: food and supplemental forms of vitamin D are not replacement sources for lack of sunlight in life. There are certain physiological reasons why:

I could lecture endlessly on the importance of sunlight to the human equation, but that is for another article. I want to talk about how I got my levels up from a mission-critical 27 ng/mL up to a decent 51 ng/mL thru a record-setting wet winter!

It was really straightforward actually, involving only two simple steps:

I should note that I possess an unfair advantage that many people do not have in this world; which is being caucasian. My evolved ability to suck up even the smallest amounts of sun exposure means my vitamin D levels can more easily be developed than most other races of people. So to my fellow whites, if you are lack vitamin D, you have no excuses unless you live in the far north. If you are darker then me, then you just need to practice Step 1 more often. Maybe in winter, you won’t be able to raise your numbers up, but you can certainly stem their downfall until sunnier days show themselves again in the Spring and Summer.

Next, I will talk about what most guys that come to us are looking for help with, testosterone. I will note that high Vitamin D levels are ideal for high T levels. For instance, getting sun on the balls will increase testosterone levels. It’s science!

There was not much change with my testosterone as you can see below. I am happy with it but definitely want to work to raise it up some more. Getting over 900 ng/dL would be great! I know Logan is shooting for 1,000 ng/dL but already being at 845 ng/dL, he should be aiming higher. 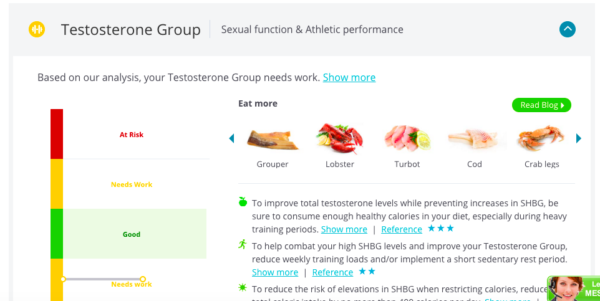 The first one shows the following three tests all combined together. Seemingly, my SHBG is still so high that it pulls both my T level and my free T level down to the needs work level. Damn you Sex Hormone Binding Globulin…

That is not the one to look at though. My normal testosterone didn’t really change much, just dropping by 10 ng/dL. For someone that does no hardcore strength training at this time and is currently over normal weight by some 20 lbs, I think this is pretty damn good for our day and age. I attribute this to the herbs and my vitamin D levels more than anything. Ashwagandha tincture in particular, though, I have started getting back into the pine pollen powder as well. My next test will be interesting to see how that may help it.

Free testosterone is the one you usually want high because that is what is surging through your bloodstream ready to do work. Mine went up by 0.5 pg/mL which is not a lot, but I will take it. This weak increase is probably due to the following.

Yeah, my SHBG was excessively high for my first test and happily has been dropping since then. It is still really high and definitely is something that I need to work on. I take some of our Nettle Root Tincture everyday now, so hopefully it will be help lower this before the next test. My diet is getting cleaner as well with a lot more seafood in the works, and this will certainly help here.

Besides my SHBG and vitamin D levels being once at risk, there were two more that have seemingly optimized since the first blood test.

Was once strangely high, now good to go, my Creatine Kinase level: 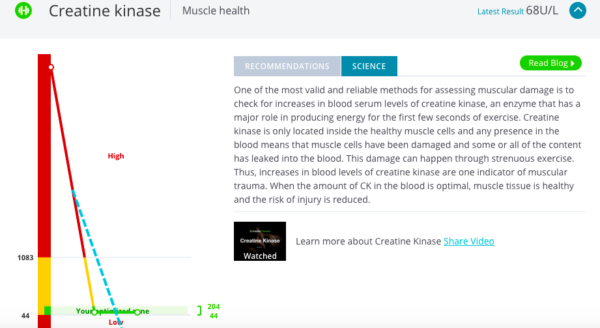 This is probably pretty balanced most of the time now. After seeing what happened with my first test, I backed off of training in a big way. Partly, the test results made me come to the conclusion that I needed to take an extended break from running. Since early December, when I quit running after a last 8-mile trail race, I have maybe gone for a total of perhaps 18-22 tiny runs. I am doing this to allow myself to rehab structural weaknesses before getting back into it. Running would slow this rehab process down. And the universe seems to agree with me as whenever I try to get back into it, I somehow injure myself within the following two weeks.

Obviously, without any crazy running workouts or other intense training sessions while I rehab, this one is easy to stay optimized. The hard part will be keeping it that way when I return to those things but knowing this; I can prioritize recovery like I never did before.

Alanine Aminotransferase or ALT is a liver enzyme.

My ALT was way out of normal range as you can see but is doing fine now: 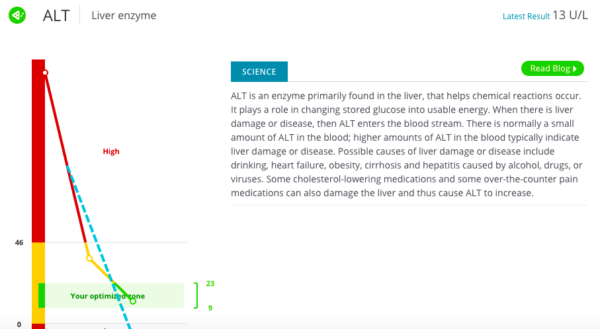 This test is why I initially decided to get that check up with my doctor where she ordered more blood tests. As can be seen it was already dropping just a week or so after my first test. My assumptions that it had been caused by eating a higher fat diet and not enough fiber may have been right but who knows? Anyways, I have quit drinking recently, so this one even four months later is more than likely doing all right.

Besides all those, the other area that need work:

I’ve already mentioned a few actions I will be undertaking to change up my future blood work results. I’ve spent the last six months learning a lot about butchery. I’ve been incorporating much higher-quality meats I purchase at my local whole animal butchery or buy directly from the owners at Diamond Mountain Ranch at my local farmers market. I’ve also spent a lot of time learning how to creatively cook all of it to perfection.

I feel like I’ve passed the newbie stage with meat and now plan on moving into seafood. This time, I am far worse off than I was with meat as besides sushi and oysters on occasion I hardly ever even eat the stuff! But the will to learn is strong, and I’ve already proven to myself that I can do much better than about 90% of the seafood I’ve tried at restaurants. I am super picky about seafood so this isn’t actually that crazy. 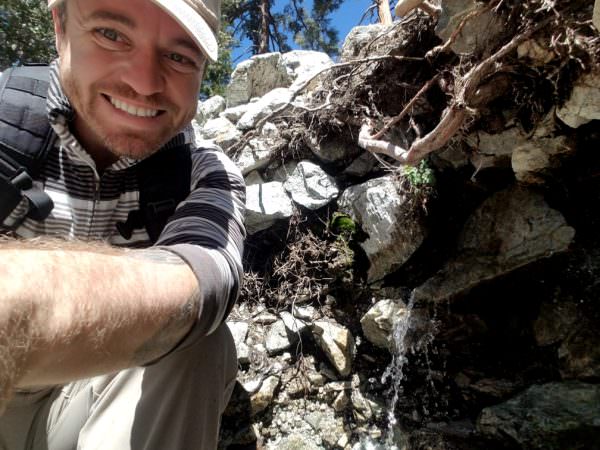 Found my first natural spring in Southern California this winter.

Besides that, I will be working on adding more personally gathered wild foods to the diet. Spending more time in nature is always my goal. You can seriously never have enough. One angle with that is just trying to be outside as much as possible throughout the day. I have the luxury of working outside if I want now so I literally could spend my entire workday outside.

I could go on and on but diet wise at least these are where I am heading. Training wise is not changing much except as I get more and more energy I will be applying myself accordingly to increasing movements in intuitive ways. One way I really want to work on is learning how to relax in certain movements. Tension wastes a lot of energy if you can avoid it, and staying supple while moving proves a certain level of ability in being in-sync with your body.

If you have opinions or encouragement on any of this, please leave a comment below. I welcome any and all advice or opinions no matter how strange.

Logan posted his second results a while ago but if you didn’t see how InsideTracker is working for him you can head here. If any of this has peaked your interest in what InsideTracker does, then for sure check out what they are all about by going here.