The word is used to describe a number of different drinks all across Central and South America.

It is a sacred and very important daily drink of the Achuar people in the Amazon jungle.

There it is made with the manioc, also known as yuca or cassava, roots. After harvesting they are peeled and boiled. Then the women chew up the roots and spit them back out into a vessel. This is allowed to ferment overnight or longer.

The bacteria from the mouth mixes in and then ferments the broken down sugars into ethyl alcohol and carbon dioxide, just like any other alcoholic fermentation process.

Of course, the fact that it is made with SPIT is off-putting to many people.

I, being the weird person that I am, was excited to try it. As you might imagine it was sour. Like many new tastes I can’t say that I completely enjoyed it from the get go, though it was okay.

But it does have a taste I know that I could come to love with repeated exposure.

The Achuar people will drink up to and even beyond a gallon of this each and every day. 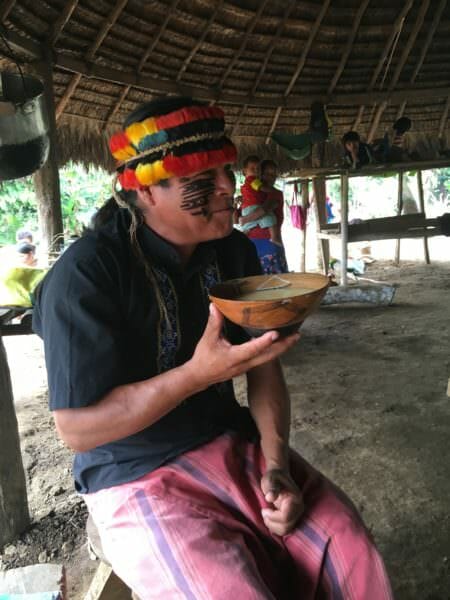 For them it is the main source of nutrients and calories.

It is the main source of hydration, since they don’t drink pure water.

And being a raw fermented beverage it is also the principle probiotic.

Typically, it is low alcohol (estimated around 2-3%) but for parties they let it ferment longer and can certainly get drunk off of it.

Only the women are allowed to make it. They prepare it for their family and guests and it is a big point of pride to make good chicha. Men are not allowed to touch chicha except to their lips and down the digestive tract.

If you’ve read this far then you’re thinking one of three things. That’s disgusting. That’s interesting. Or that’s something I’d like to try.

Regardless of how you’re feeling about this specific fermented drink, my point in writing this is that fermented foods are a part of every natural diet.

What exactly these are change from culture to culture?

Something I do drink pretty close too daily is kombucha, which is both a bacteria and fungi rich probiotic drink.

My local store recently starting carrying sauerkraut juice. This is the leftover or excess juice from fermenting sauerkraut. It tastes amazing!

Fermented foods are one of the “lost food groups” from modern diets, yet they are a necessity if you’re seeking radiant health.

Another “lost food group” is herbs. Besides a few culinary herbs added to dishes most people basically don’t ingest any.

While many of the herbs we sell don’t taste the best you might be surprised at what can be added to foods and drinks.

Like my daily coffee with he shou wu and chaga added.

Of course just taking them like a supplement is also a fine way to do it.

Right now you can get 15% every herb and formula we sell. Simply add the coupon code NEW when checking out.