People seem to be waking up to the fact that their food doesn’t just magically appear in a box waiting to be grabbed from a grocery store. They are learning that it is ‘harvested,’ sometimes in disturbing and unnatural ways. The desire to be healthier and happier more than anything seems to be moving the masses ever so slowly towards a deeper understand of where their food comes from. But even when you personally know the farmers and ranchers that feed you on the daily, one will get to a point of wondering if this is the height of healthy eating. 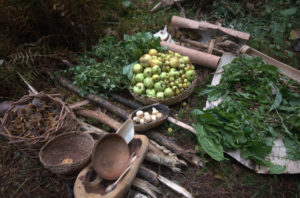 A fall harvest for a class at Roots School in Vermont

It is only natural to finally look to the wild from whence we came and see there the food that we naturally evolved to eat for tens of thousands of years (for Homo sapien sapien). Evolution inside the ecologies of the places we lived adapted us to these foods. The 10,000 years or so we have attempted to supplant that diet with one of our own design is certainly not enough time to change the desires of our bodies much.

But perhaps this doesn’t immediately promote a desire in you to want to go out and chomp on some grass. Well, this is a little excerpt from the masterful work; Ancestral Plants: A Primitive Skills Guide to Important Edible, Medicinal, and Useful Plants of the Northeast. Volume 1, written by Arthur Haines. He presents some evidence that this really can substantially influence your health. (Emphasis is my own)

Probably the number one reason people wish to learn about useful plants is to gain knowledge of those species that are edible. Collecting plants for food in a responsible manner is a rewarding pastime for several reasons, aside from obvious benefits such as exercise, money savings, and safety (you will know the source of your food and have complete control over its preparation). Harvesting plants from the landscape has been done by humans for countless millennia and, one can argue, is fundamentally built into our being. The body’s abilities to carry out metabolic processes, heal from injury or sickness, and defend itself from pathogens have evolved concurrently with a diet that is very different from the one most experience today (it is estimated that 70% of our current diet is made up of items that aboriginal people rarely or never ate). Our relatively recent reliance on agribusiness to provide the bulk of our nutrition has not undone our need for wild foods. Many of today’s chronic illnesses, including coronary heart diseases, dental problems, allergies, arthritis, various skin ailments, certain vision problems, and obesity, are the result of poor diet that relies too heavily on refined sugars, overly processed grains, and cage-reared, grain-fed animals. Extensive research shows that hunter-gatherer societies were free from many ailments that commonly plague people eating a modern diet… 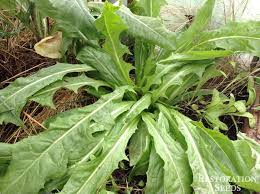 Chicory is commonly sold in stores under the name of Dandelion.

…There is a substantial body of evidence that wild plants are usually more nutritious then their cultivated counterparts. For example, Zizania aquatica (southern wild rice) grains contain higher concentrations of protein, magnesium, phosphorous, potassium, and vitamins B1 and B2 than Oryza sativa (cultivated rice). Spinacia oleracea (spinach), a vegetable commonly touted as having some of the highest concentrations of pro-vitamin A, is easily surpassed by many common wild plants. Spinacia oleracea has 8100 units of pro-vitamin A (beta carotene) for every 100 grams of leaves, but, same weight of material, Alliaria petiolata (garlic-mustard) has 19,000 units in its basal leaves, Chenopodium album (common goosefoot) has 14,000 units in its young shoots, Leucanthemum vulgare (ox-eye daisy) has 12,000 units in its early seasonal basal leaves, Plantago major (common plaintain) has 10,000 units in its early season leaves, and Viola sororia (woolly violet) has 20,000 units in its early spring leaves (and this is only a partial list of the species assayed that surpass Spinacia oleracea) This comparison can be done for other vitamins (especially C and E) with similar results. 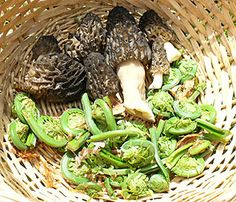 If collecting mushrooms be sure you or an expert can ID before consuming.

Compared with cultivated plants, wild plants often contain significantly more phenols, which antioxidant activity. Along with higher concentrations of various vitamins, wild plants contribute significantly to protection from cancer and atherosclerosis. Further, wild plants contain more omega-3 fatty acids, essential fats that are necessary to health. It is estimated that the modern diet has a ratio of omega-6 to omega-3 fatty acids of 10:1 (even varying to as high as 20:1). The hunter-gather diet has a ratio of roughly 2:1 for these essential fatty acids. This increased intake of omega-6 fatty acids in contemporary diets is partly the blame of amplified use of vegetable oils from such plants as Zea Mays (corn), Helianthus annuus (sunflower), Carthamus tinctorius (safflower), and Glycine max (soybean). This has resulted in increased inflammation, blood viscosity, vasospasm, and vasoconstriction, which collectively contribute to arthritis, high blood pressure, and increased risk of heart and brain diseases (e.g., heart attack, stroke). Omega-3 fatty acids, on the other hand, have many positive properties (reducing swelling, restoring proper rhythm to the heart, lowering blood pressure, and reducing total cholesterol, respectively). In addition to their ability to protect the human body from cancer, wild fruits also often have less sugar than cultivated fruits, making them a healthier choice for those who must monitor sugar intake.

In the end, the choice of personal health is yours. Learning to feed oneself though, even if to supplement a modern diet, can reconnect you to nature, making life more enjoyable as well as healthier.