“We no longer carry this product. Please find our most popular herbs on this page“

In Greek mythology the Titans existed and ruled the world before the Olympians. They were giants of incredible strength who ruled during the legendary “Golden Age”.

One of these Titan’s was Atlas. He is most commonly seen supporting the world as in the picture below.

In the War of the Titans, Atlas sided along with his brethren, and was a great commander and leader of the Titan armies. In the end, Zeus, son of Chronus, overthrew his father, resulting in the Olympians becoming the rulers.

As a special punishment Atlas was sent to the edge of the world to hold the axis between the heavens and earth apart. Because of his incredible strength and endurance he was able to do this, which no one else could match. 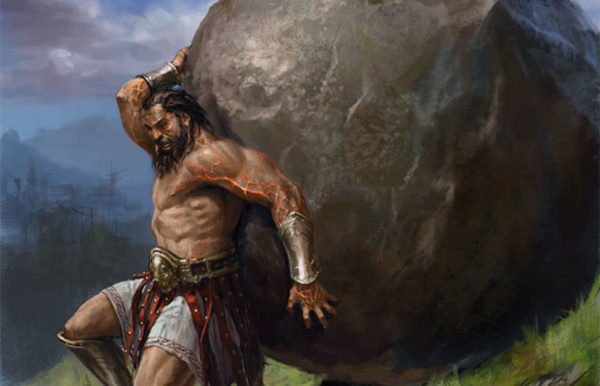 Our Hercules Pre-Workout Formula have been quite successful in helping people become stronger and more enduring. Titan delivers many of the same benefits as well as unique ones, designed to help you best recover from your workouts.*

It is a combination of four amazing herbs from across the world: suma, maral root, shilajit and mucuna.

Called the Brazilian Ginseng, Suma root is a powerful herbal tonic. In South America where it grows it has earned the nickname “para tudo” which means “for all”.*

It contains novel saponins, ecdysterones, glycosides and triterpenes. Many of these compounds have been studied for far reaching effects on the cardiovascular, nervous, immune and endocrine systems.*

A favorite of Russian scientists, though without the same fame of Eleuthero. They found increased protein synthesis leading to more muscle mass, increased work capacity, stress reducing effects and more.*

Like suma, maral root is a rich source of ecdysterones, but this may only be a part of its benefits.* You can read more about maral root here…

Shilajit is known as “The Destroyer of Weakness” and “The Conqueror of Mountains”. Do we really need to tell you more about why it’s good to have in a post-workout formula? Okay we will…

Shilajit contains approximately 85 minerals. Without an adequate supply of minerals your body cannot function optimally. Further shilajit appears to work directly on the mitochondria in your cells, helping these powerhouses to produce more energy.*

The other main benefit of shilajit is that it acts as a potentiator.* Anything taken with it, including the other herbs in this formula, are better delivered and assimilated in your body, thus becoming more powerful. You can read more about shilajit here…

Mucuna is an herb with many benefits. It’s focus here in Titan Post-Workout Formula is on its hormonal effects. Through L-dopa which converts to dopamine, which then can inhibit prolactin, some research shows that mucuna can aid in BOTH Androgens and Growth Hormone.*

One action is that increased levels of L-dopa act as an inhibitor of somatostain, which inhibits growth hormone.*

Further, increases in dopamine are theorized to increase motor unit recruitment, thus allowing you to do more in your workouts.* You can read more about mucuna here…

It is recommended to take Titan Formula after your workouts at a dose of 1 teaspoon, up to 1 tablespoon. Simply throw a spoonful in your protein shake!

That being said, some people seem to prefer it as a pre-workout. That’s fine too. It’s also recommended to be taken on your off days too.

Each 100 gram bag (about 3.5 ounces) contains approximately 42 teaspoon or 14 tablespoon doses. So each bag lasts two to six weeks depending on the dose you take.

Not recommended for pregnant or breastfeeding women, nor for children. Titan formula may cause interactions with blood pressure, anti-anxiety, and anti-depression medications. Shilajit is typically not recommended for those with gout. 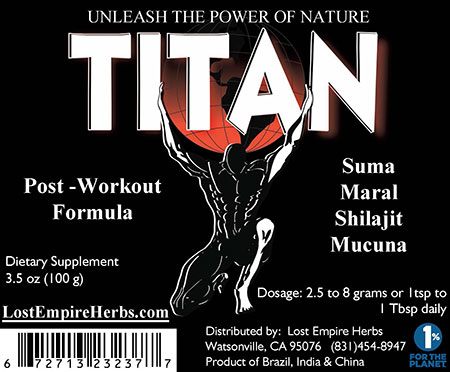