Home » Blog » The Basics and Benefits of Dihydrotestosterone (DHT): Part I 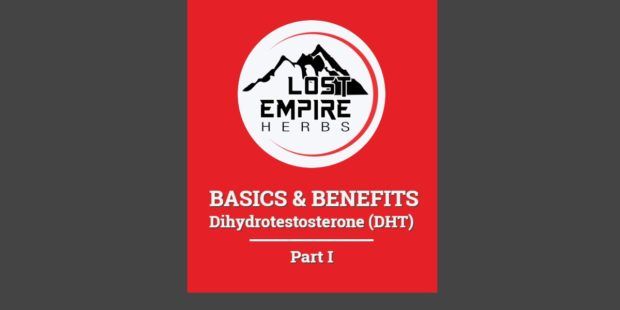 Dihydrotestosterone (DHT) is an endogenous androgen sex steroid and hormone. The enzyme 5α-reductase catalyzes the formation of DHT
from testosterone in certain tissues including the prostate gland, seminal vesicles, epididymides, skin, hair follicles, liver, and brain.

Testosterone is attributed with all the masculine traits it delivers from muscle mass, sexual function, recovery, antiaging and neuroprotective properties.

During puberty, it is responsible for facial and body hair and the deepening of the voice and growth.  However, DHT also plays a large role in these things too. In fact, it is more powerful than testosterone in many respects and thus may play a larger role in at least some of these functions.

This is the first of a three-part article series on DHT. This first article covers the basics, the benefits, and what to look out for in high or low DHT.

The second part will dive into the confusing subject of DHT’s role in prostate issues, hair loss, as well as acne. And in part three, we’ll look at various lifestyle, diet, supplements and herbal options for either increasing or decreasing DHT.

The Basics of DHT

DHT is created inside the human body by enzymatic conversion using 5-alpha-reductase (5AR) of testosterone into DHT.

However, that is not the only way DHT can be created. Androstenedione is also converted by 5AR into androstanedione which is then converted by the enzyme 17-oxoreductase into DHT.[1] According to this study, this pathway created more DHT than through the first more well-known path.

DHT has a higher affinity (roughly double) for binding to androgen receptors in cells and furthermore, it appears to stay bound to these receptors longer (testosterone dissociating five-times faster).[2]

From that study, I found this quote interesting,

“Our results suggest that the weaker androgenic potency of testosterone compared to that of dihydrotestosterone resides in its weaker interaction with the androgen receptor, most clearly demonstrable as an increase in the dissociation rate of testosterone from the receptor. When present in relatively high concentrations, however, testosterone overcomes this defect by mass action.”

In other words, although DHT is stronger and longer-lasting, most people have one-tenth to one-twentieth the amount of DHT as total testosterone available.

I’m convinced that so much of hormone health has to do with the receptors, possibly more so than the hormones themselves. But as these are not easily measured like that of circulating amounts in the blood, we don’t have a good picture of the workings inside living human cells.

DHT also gets bound up to SHBG at a higher rate than testosterone. (As covered in this article, that doesn’t mean it’s inert, but may change in how it functions.)

Unlike testosterone, DHT cannot be converted into estrogen via the aromatase enzyme. In fact, there is limited research showing that DHT may limit aromatase activity[4] and even competes with estradiol for binding into estrogen receptors,[5] therefore having some antiestrogenic activity.

Like many other hormones, the liver is responsible for creating most DHT; however, it is also synthesized in smaller amounts locally in the genitals, prostate, skin, hair, kidneys, brain and elsewhere.

As with all reference ranges, there will be some variance between labs and doctors.

Again, while looking at serum or blood levels is useful, it does not give a full picture. “Circulating levels of DHT in response to testosterone replacement therapy (TRT) do not correlate with those found in androgen-sensitive tissue (e.g., prostate, adipose, muscle) due to local regulatory mechanisms that tightly control intracellular androgen homeostasis.”[6]

This becomes particularly important when we discuss the androgen-sensitive prostate and hair follicles later on.

One other thing worth mentioning is something t I found in another article, it stated, “My experience on the Peak Testosterone Forum is that often men experience libido problems when one gets into the low 30’s (or below) ng/dl range.”[7]

If libido is an issue for you then you may need to consider having your DHT measured.

An ideal range for most men is probably going to be above 50 ng/dL.

The complicated details of prostate issues and hair loss with DHT will be covered in the next article. High DHT is generally not seen as an issue, except where it may be localized in certain tissues, but this is where it starts getting into confusing topics.

Benefits from DHT as found in Human Trials

To understand some of the effects of DHT we can look at a number of studies that have been done supplementing directly with DHT.

One study used a transdermal DHT gel and looked at many different effects. This study was done with men 60 years or older for three months. 33 men completed the study, with 17 in the DHT group and 16 in the placebo control group.[8]

What did Not Change:

In another study with a ten-day test of injected DHT, similar hormonal results were observed except for the lowering of estradiol (E2). [9]

Still another DHT gel study featured 120 men (60 in the DHT group and 60 with placebo) over six months. The median age was 58 years old. These men had low testosterone, high SHBG, lack of morning wood and various other symptoms associated with such before they began. [10]

It’s also pretty amazing to see on these charts, how supplementing with DHT radically increased DHT while also, radically decreased testosterone. These returned towards normal after the gel was stopped.

DHT’s function in sex was first made clear by patients being treated for prostate disease or hair loss with drugs such as Finasteride or related 5AR-inhibiting compounds. Unfortunately, these drugs also have some devastating and sometimes permanent side effects. Placebo-controlled studies of Finasteride show this is a consistent side effect. [12]

These drugs are associated with a 5% to 9% new onset of erectile dysfunction, decreased libido, and a decreased ability to orgasm. [13] This appears to show that DHT plays a strong role in these areas, though it is not the only thing that these drugs affect.

One other interesting study looked at 92 healthy men between the ages of 18-22 years old. DHT, and only DHT out of many other hormones measured include testosterone, DHEA, estradiol, estrone, androstenedione, and SHBG, was a predictor of the number of orgasms per week. [14]

Levels of increase of DHT by 39 ng/dL in blood corresponded to an average of one more orgasm per week.

When reviewing the data, this paper said that “likely that there are local, tissue-specific effects of DHT on cognition and/or mood that may be difficult to discern in the context of systemic hormonal alterations, despite the fact that lipophilic steroid hormones like T and DHT can cross the blood-brain barrier” [6]

Unfortunately, the specifics of such cognitive or memory effects are not known. There are some possibilities pointed out in animal studies where DHT modified the synaptic structure, but it’s too early yet to say for sure. There’s also possible action on the GABA neurotransmitter and receptors.[15]

In that same review of DHT, I found this line stating that testosterone and DHT could possibly affect telomere length,

“It is intriguing to speculate that the increase in all-cause and cancer-specific mortality observed in men with low T and DHT may, in part, reflect reduced actions of DHT and estradiol to preserve telomere length.” [6]

There is also some evidence which shows that DHT plays a role in the reason that men overall, have less auto-immunity than women. [16]

Some of the earlier studies noted some changes in fat and muscle mass, though not huge amounts and yet, other studies did not have the same results.

Still, there are some other studies with mice, that show some interesting interactions may occur. These include DHT promoting the uptake of amino acids into fast-twitch muscles. [17] Also, DHT increasing ATP production, cell signaling, cell proliferation, and increased protein synthesis. [18]

Clearly, DHT plays a role in a wide range of areas in the body. As you can see there is a lot of potentially important roles for DHT that we’re just now beginning to find and understand with science.

Next week, I’ll dive into DHT’s role in hair and the prostate, two of the most significant areas in which it has been implicated for decades.