Welcome to a new series. I’ve spent the last year and then some doing weekly Medical Monopoly Musings where I explored the various pieces, most notably the corruption, involved in the existing healthcare paradigm.

That will continue. However, my aim has never been simply to point out that the emperor has no clothes.

“You never change things by fighting the existing reality. To change something, build a new model that makes the existing model obsolete.” – Buckminster Fuller

Instead, like a cultural or systems surgeon, my goal has been to diagnose the disease, so that we may set about correcting it. And this is not a mere band-aid to treat the symptoms but getting to the root causes. To set about things in motion so that not only is the disease managed but even greater health ensues. 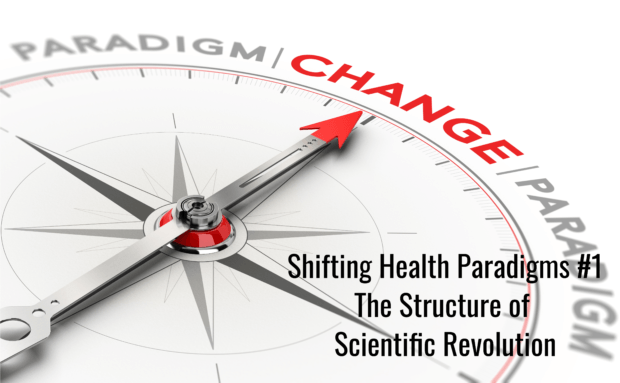 Understanding the system is critical to building something better. Without clear and accurate hindsight, the same problems could easily rise again. Or the shift can be effectively slowed.

I’ve chosen to use the term paradigm very specifically. (Actually, it chose me, but that’s a story for another time.)

While the word existed before, it was thrust into the spotlight with Thomas Kuhn’s The Structure of Scientific Revolution. This book detailed a boom-and-bust cycle, if you will, of how science has shifted over the years, most notably in the fields of physics and chemistry. 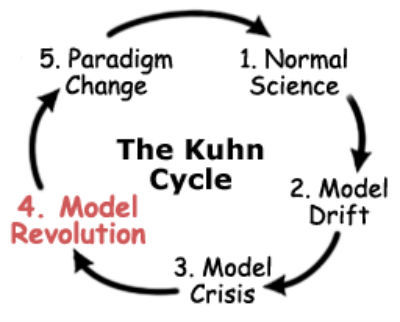 For those not familiar, here is a basic outline. For some time, science proceeds by “normal science,” that is the doing experiments, and figuring things out. Progress is made.

As this continues “model drift” occurs. The experiments, and even human experience, begins to not fit into the tightly defined ideal of what science theorizes should be happening.

The end of all disease has been promised for over a century now. We’re no closer to that, in fact with the rise of chronic disease, even further away. This is the “model crisis.” People are, overall, getting less healthy rather than healthier as a result of our systems despite ever increasing outlays of money.

As 2020 has shown, the medical frame of how to fight a virus, without taking into consider the negative consequences of such actions, has put this model crisis front and center.

This leads to “model revolution.” The revolutionaries talk about, experiment with clinically and in the laboratory, other models of the world. The truth is this has been happening for decades.

Ultimately, this revolution leads to the “paradigm shift” where the experts in the field, followed shortly by the lay public, take on a completely different set of beliefs and values that change how they see health and the world.

What Kuhn did not consider was how money and what I like to call “scientific gatekeepers” could stall the revolution from happening. Examples were not so readily available in his time.

It has been very profitable to hold onto a profitable paradigm. There are lots of stakeholders involved! Not just big pharma, but insurance, government, science, schools, medical device companies, hospitals, doctors, nurses, media, etc. all pegged into the current paradigm in crisis.

Still, this is a natural cycle. While it may be stalled, it cannot ultimately be stopped.

The further difficulty of this shift is that it is not just a single paradigm at play. But, the new model (in many ways also older) is holistic. Being so, this paradigm affects not just health, but virtually all major systems which are similarly going through crisis.

This new series, Shifting Health Paradigms, is about showing the old paradigm, the new paradigm, and what it takes to shift on an individual as well as collective level. This will include paradigms you can absorb now to start taking actions on, as well as institution-level shifts to come (which can in many cases be started today by individuals).