My friend told me about a different pre-workout supplement that I had to try. It’s called C4 Extreme. He even made me take it without telling me what it was first. I have to admit I was impressed. I felt great and had a great workout. I bought a couple samples of it to experiment with for myself.

I liked the result. But I didn’t like the bright baby blue color, fake taste and all the unknown chemicals that might be involved. The advertisement claims no fillers or dyes but this is a blatant lie. Maybe not, if you don’t call your food colorings dyes. 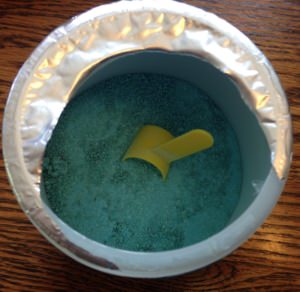 That’s when I began to reverse engineer the supplement. Luckily, all I had to do was analyze the list of ingredients. Some of the most popular workout isolated compounds were there.

Beta-Alanine – This amino acid is said to reduce fatigue and increase carnosine in muscles.

Creatine Nitrate – This form of creatine is more absorbable in the body and works as a vasodilator, and increases ATP and Nitric Oxide.

These are the three main ingredients followed by a blend of others.

One of the other ingredients is niacin in a small amount. Having taken niacin before the flush was somewhat similar to what I felt when I first took C4. It also acts as a vasodilator (how many of those do you need in one blend?) opening up blood flow and the cells in the body.  Because of these effects, a little niacin acts as a delivery system, delivering whatever you take it with into the cells quicker and better, than when taken alone. This is why I focused on using it with all the herbs.

I had already been using Polyrhachis Ant Extract as a pre-workout supplement for some time. This tonic herb from China has a great reputation for providing instant energy and being potent for sexual health.

It has absorbable ATP to directly fuel your cells. It is known as a greater qi tonic than even the much better-known ginseng. In the Chinese system of the three treasures a qi tonic is one that provides usable everyday energy. This is critical for working out for obvious reasons.

It’s the highest concentration of zinc from any food, a necessary nutrient needed for muscle contraction, about 300 enzymatic reactions, a large component of the creation of semen in men, and much more.

What would happen when I combined a little niacin as a delivery vehicle with ant. Wow! The results were even better than before.

I then experimenting with a number of other herbs to make it even more powerful. Some worked well. Some didn’t as much. After lots of workouts and lots of attempts with slightly different blends, I settled on what I’m now calling the Hercules Pre-Workout Formula.

When it comes to herbs any yang jing herb is going to probably be great. I decided to use cistanche. This herb is sometimes called “cistanche in your pants” as it is said to not only increase sexual potency but even size. You can see it even has a phallic shape.

As discussed with top herbalists the yang energy needed for sex is the same as for working out. Thus, a top yang jing herb like cistanche is crucial for this blend. It was when I added this herb to the blend I had going, with the ant and niacin that I hit my first ever 1000 lb. lift. Only a partial I did 170 lbs. more than I had the last time I attempted this lift. That’s quite a PR.

The next part was to include a yin jing herb, something that would support the body in recovery after the workout was over. I choose maral root. Although few people in the west are aware of this herb it has a fairly extensive history in Russia and the surrounding areas.

It was even prescribed to Russian athletes to help recover from hard workouts. It also contains novel plant steroids said to help build lean muscle mass, increase work capacity, as well as a host of other benefits.

This blend is a mix of herbs with the right amount of niacin. No fake colors, no added flavors. Nothing else. For this reason, it doesn’t taste great, but then powerful herbs seldom do.

It’s funny. I went back and tried C4 again after experimenting with my blend to compare them once again. I was surprised because it felt weak in comparison to what I created.

Not only will Hercules Pre-Workout Formula help your workouts but you’ll likely discover lots of side effects…beneficial ones. These herbs increase antioxidant capabilities, help with sex in many ways, modulate the immune system, support anti-gaining and so much more. They‘re also packed with nutrition.

I laid off of taking it for a little while and just got back to using it. Starting again made me wonder why I stopped in the first place. Not only can you go harder in your workouts but longer as well.

When we announced this last week it sold out within a couple hours. Since then we’ve got lots of emails and phones calls from people wanting it. So we put together another small batch which is available now.