(We no longer carry this amazing here, but do check out our Athena Formulas for Women Here)

Rehmannia benefits the kidneys, adrenals, joints, blood sugar and more. This article will dive deeper into what it does and how it does it.

Rehmannia glutinosa, is a root that has long been used in a prepared way in Traditional Chinese Medicine (TCM). Sometimes it is called Chinese Foxglove. 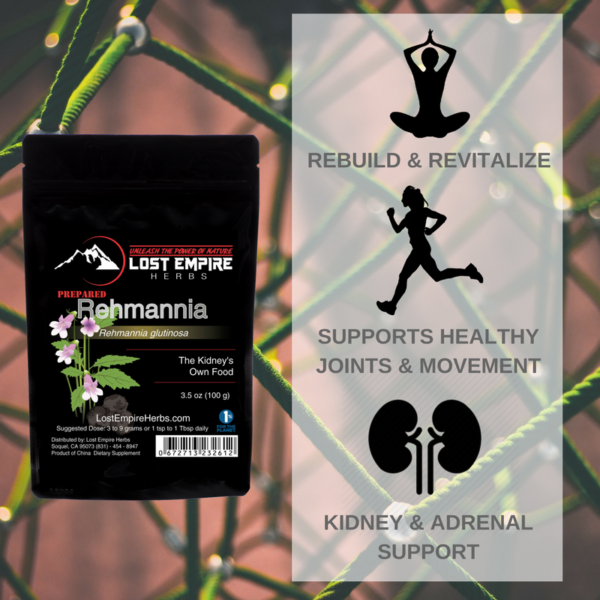 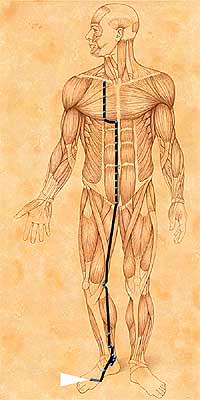 Let’s start off with its nickname, “the kidneys’ own food.” While Rehmannia does have renoprotective effects1, this is primarily talking about Kidneys in the TCM sense of the word. The Kidney meridian is responsible for a whole lot more than filtering fluids of the body, though Rehmannia does appear to help in urinary tract health, especially in men.

The kidneys are the storehouse of Jing, the primal essence which is compared to your life force, constitution and has important functions in hormone health.

In this case, Rehmannia is specific to the adrenal glands and has been used to help in cases of adrenal fatigue. In TCM it is said to “cool down internal heat.”

In a classic herbal text from early China, Rehmannia was listed as a superior herb and said:

“Rehmannia is sweet and cold. It mainly treats broken bones, severed sinews from falls, and damaged center. It expels blood impediments, replenishes bone marrow, and promotes growth of muscles and flesh. When used in decoctions, it eliminates cold and heat accumulations and gatherings, and impediment. Using the uncooked is better. Protracted taking may make the body light and prevent senility. Its other name is Di Sui (Earth Marrow). It grows near rivers and swamps.” – Shen Nong Ben Cao (The Divine Farmer’s Materia Medica)

Its work on the bone marrow is another correlation to jing.

Iridoid glycosides are a major component of the root, such as catalpol, the first and main one identified.2 These, in turn, stimulate the production of anti-inflammatory adrenal cortical hormones from the adrenal cortex.

These hormones have other effects including modulating the sex hormones. It is these components that are theorized to help with the symptoms of menopause in women.

A study with rats found the Rehmannia supplementation helped raise estradiol level in females and testosterone in males.3

Catalpol has been investigated further. In one study they wrote, “The results showed that catalpol could significantly improve not only spatial learning and memory but also locomotor activity and exploratory behavior of aged rats with memory loss.”4

Another study found it improved neurological function and reduces inflammation in both the cells and demyelination.5 This was especially the case in those neurons involving dopamine.

Rehmannia also has a reputation for supporting thyroid function. While no research is on this specifically, one paper was showing that inflammation in CNS tissue can cause dysregulation of thyroid hormone signaling.6 Specifically, OPC’s or oligodendrocyte precursor cells get impaired, and catapol is protective to these.4 So perhaps this may be one of the ways in which Rehmannia helps support the immune system. 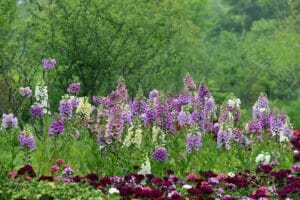 Used in helping people repair from broken bones and other injuries were regenerating the tissues is important. This includes the bones, muscles, tendons, and ligaments.

Besides the inflammatory and hormonal modulating components, Rehmannia is known as a blood tonic and purifier. In TCM, blood is considered a denser form of Qi. In being able to deliver nutrients and energy to the cells, as well as take away wastes, it can help aid in healing.

Furthermore, Rehmannia is considered moist, while the vast majority of herbs are drying. Bringing moisture to your body often allows it to stay more youthful.

Speaking of the blood Rehmannia affects blood sugar balance. In rats induced to have diabetes (with paraquat, an herbicide), a water extract of Rehmannia was able to reverse the glucose metabolism and insulin-signaling disorder.7 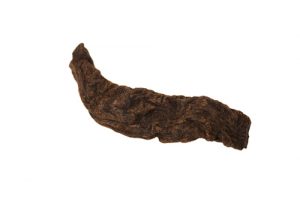 Unprepared Rehmannia is just the roots dried either in the sun or in an oven. One method of preparation with Rehmannia is soaking it in water and rice wine, then steaming it for eight to 24 hours long.

Another preparation is the same as He Shou Wu, cooking it with black soybeans and white wine.

The unprepared Rehmannia is cold. Prepared is warm. Thus, based on your constitution one of these may be the better option for you specifically. 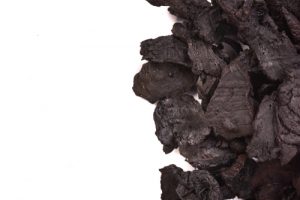 When cooked the herb becomes more dense, sticky and more nourishing. This can benefit the kidney and liver qi in helping to calm and control it.

However, it can also be harder to digest for some.

At this time, we only have a prepared Rehmannia extract available.

Although this will have the properties mentioned above, being in a powder form, rather than the dense, sticky discs it’s often found it, it may lighten up some of these properties.

There are a number of traditionally used in Chinese formulas. 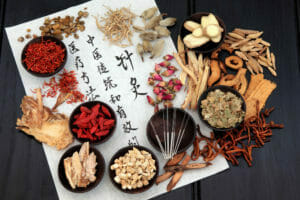 Rehmannia 6 includes Rehmannia, Cornus, Dioscorea, Alisma, Hoelen, and Moutan. Rehmannia 6 is one of the most popular formulas in the world, supporting the kidney, liver, and spleen. Many of these other herbs are used to help balance out the actions so that no excessive action occurs. Furthermore, different herbs help to support the actions, like Cornus supporting Rehmannia’s nourishing action.

“The ultimate aim of the formula is to replenish the kidney, and this is accomplished by addressing each requisite step involved in the normal process of gaining ‘postnatal’ kidney essence.” – Subhuti Dharmananda, Ph.D.8

Rehmannia 8 includes all the ingredients from Rehmannia 6 plus the addition of aconite and cinnamon. These additional herbs are there to support yang energy in the kidneys.

Tang-Kuei Four Combination includes Rehmannia, Tang-Kuei (note this is a different spelling of Dong Quai), Cnidium and Peony. Since Dong Quai also has strong blood building properties, this formula is specific for cases where that is needed.

There are many other formulas with Rehmannia in it, but these are some of the classics.

Rehmannia contains stachyose, which is an indigestible starch, the same as found in beans. Thus, this can cause gas and bloating, though generally, you’re having a smaller amount than what is eaten with beans so the effect will not affect many. Large amounts of Rehmannia, as is sometimes recommended, is more likely to gas, bloating and a feeling of heaviness in the digestion.

Rehmannia is untested in pregnant and breastfeeding women, so is best avoided in these cases.