Cordyceps Militaris supplements have been popular among athletes ever since it was reported that the Chinese female track teams of nine members used it for great effect, setting nine world records in the 1993 National championship.

Part of the athletes’ training regime included drinking a special drink which included cordyceps after every training session. Further medals came in the 1996 and 2000 Olympics.

Originally thought to be magical by the Chinese people, it is not a mushroom in the conventional sense. Cordyceps is a parasite that attaches itself to various insects. The spores invade their body, killing the host, then sprouting a club-like mushroom from their head. A rarity in Chinese medicine, this is considered both a strong Yin Jing and Yang Jing herb.[1]*

It is also considered a premiere Lung tonic, which may lend to it’s fatigue diminishing capabilities.*

Science is still in its infancy with regards to cordyceps. This is further complicated by different species, mycelium vs. fruiting bodies, and qualities of extracts. What follows is some of the science done around components found inside Cordyceps militaris supplements as well as whole extracts. 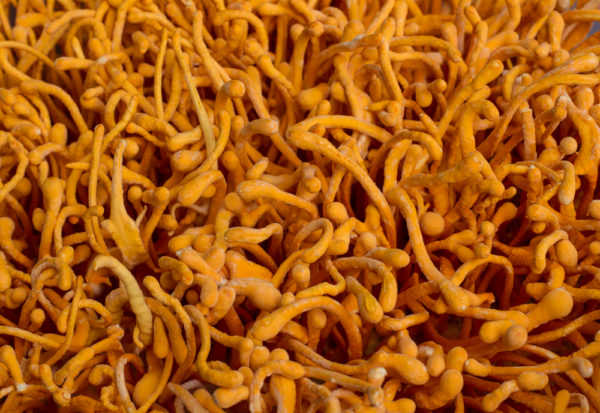 This is the “main” compound that is looked at, found in different cordyceps species.

A recent batch of our extract was found to have .372% cordycepin.

Cordyceps is rich in polysacharrides. This includes the most well known in curative mushrooms, the beta-glucans. However there are others including alpha-glucans, cordyceamides and more. These have many beneficial properties:

This batch of our extract was found to have 30.4% beta-d-glucans.

CMP also appears to protect the mitochondria, the powerhouses of our cells. [10]*

Other effects cannot be listed though some studies are showing much promise in certain actions of Cordyceps militaris polysaccharides.[11]

Together, these effects have led to cordyceps reputation for anti-aging and so much more.[10-11]*

What Kind of Cordyceps is Best?

There are many species of Cordyceps around the world, all of which invade different insects. The most well known is Cordyceps sinensis, though Cordyceps militaris is also widely used.

First off, to get the real wild Cordyceps, meaning the actual parasitic fungus on the insects, you’re going to be paying a lot. As these must be collected by hand, from high altitudes in Tibet and surrounding areas. If you’re not paying large amounts of money you are not getting the real thing. In fact, wild Cordyceps are the most expensive herb in the world. The price has even gone up to $35,000 per pound!

Another thing many athletes want to know is whether Cordyceps militaris supplements can give the same endurance benefits as Cordyceps sinensis. As far as can be determined by research at this point, it does.

Based on these facts we feel that our Cordyceps militaris extract is the best commercially available for the price.

Dosage and How to Take Our Cordyceps

Our Cordyceps militaris supplement is purely fruiting bodies and is 100% Organically grown, produced in a state of the art facility in China. These are then dual extracted in a ratio of 10:1 with alcohol and hot water and dried to form this powdered extract. 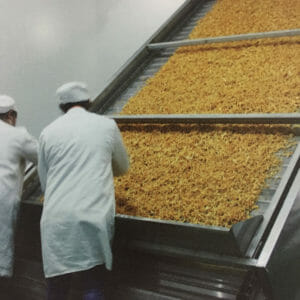 Where does it come from?
From an organic farm in China.
Is there anything else in the product?
No.
What is your cordyceps grown on?
Organic barley grain. This is our only fungi product that is not grown on wood. However, it is important to note, that unlike many other cordyceps products, the barley grain is not included in the final product. This is what often is called mycelium, but research points to this being inferior to simply use the fruiting bodies.
Is this gluten-free?
Yes. Although barley is used to grow the Cordyceps, there is no barley, nor gluten in the final product.
Are insects used in this product? Is this vegetarian or vegan?
No insects are used in the growing of this fungi. Instead, it is grown on grain. So yes, it is suitable for both vegetarians or vegans.
What type of extract is this?
It is a 10:1 hot dual extract. Thus, it is already extracted and concentrated with both water and alcohol, and not a raw powder.
How much cordycepin is present?
In the last testing our batch was found to have .372% cordycepin. This is considered one of the “active” constituents of Cordyceps, though it is important to note there are many others, and it’s not about any one ingredient. As a comparison, another popular Cordyceps product that is on the market was tested and found to have only .09% cordycepin, which is one quarter the amount.
How much adenosine is present?
Our current batch was found to have 0.19% adenosine.
How many beta-glucans are present?
Our current batch was found to have 30% beta-d-glucans.
Do you have wild cordyceps, that are grown on insects, available?
We occasionally do make these rarer, and more expensive, cordyceps available to VIP members.

How to Take Cordyceps:

Do I take this product every day?
You can.
How long until this product works?
Depending on how sensitive you are to your body’s reactions you may feel the cordyceps effects immediately, or it may take up to four weeks to notice a difference.
How do I take this product?
Add cordyceps to tea, coffee, juices, smoothies or consume it straight.
How do I make cordyceps tea?
Add the recommended dose of ¼ to ½ teaspoon to a cup of hot water and stir.
What's the best ways to maximize absorption of this product?
In general, extract manufacturers recommend between three to five grams of ground powder over the course of a day. The traditional recommendation is between three to nine grams a day in hot tea.
Does this product taste anything like mushrooms?
Cordyceps has an earthy and slightly bitter taste, along with a unique flavor.
Does this come in capsules?
Not currently. If you’d like you can put it in capsules yourself.
How long will this product last?
If you are taking the recommended dose of ¼ to ½ teaspoon per day, one bag will last you between 1-2 months. This will change if you take either greater or smaller doses though.

What is cordyceps used for?
Cordyceps has historically been used for coughs, chronic bronchitis, respiratory issues, kidney and liver health, nighttime urination, male sexual problems, anemia, irregular heartbeat, regulating cholesterol, dizziness, weakness, ringing in the ears, unwanted weight loss, and opium addiction. It is also used for strengthening the immune system, improving athletic performance, reducing the effects of aging, and promoting longer life. Some people use cordyceps as a stimulant, a tonic, and an “adaptogen,” which is used to increase energy, enhance stamina, and reduce fatigue.
Is Cordyceps a stimulant?
It can act as a mild stimulant.
Does cordyceps increase testosterone?
When it comes to testosterone, there are no human studies, but according to cell cultures and animal studies, there is a mechanism for it to assist testosterone production. Chances are that cordyceps may help with hormones in an indirect way.
Does cordyceps increase estrogen?
As part of a larger hormone regulatory function, they seem to conditionally boost testosterone and might increase estradiol under the same function. After all, testosterone is an estrogen precursor.
Does it lower blood pressure?
Cordyceps may lower blood pressure. Caution is advised in people taking drugs or herbs that lower blood pressure.
Does it increase energy?
Cordyceps appears to enhance energy levels in three ways – by raising ATP levels, by lowering levels of lactic acid, and by increasing insulin sensitivity.
Does cordyceps help asthma?
It has been shown to improve the functioning of the respiratory system and is beneficial for people suffering from cough, asthma, and bronchitis due to its properties.
Does cordyceps help diabetes?
Studies in mice reported anti-hyperglycemic effects. Since it may lower blood sugar levels, diabetics should check with their doctor to determine whether they can safely consume cordyceps.
Does it work for endurance?
Cordyceps became popular among athletes for this effect. There are some positive studies and some that don’t show much effect. This is mirrored anecdotally, where some people note great results, while others don’t. Try it out and see if it works for you.

Does cordyceps mushroom have side effects?
Cordyceps might cause the immune system to become more active. This could increase the symptoms of auto-immune diseases. Cordyceps might slow blood clotting and might increase the risk of bleeding in people with bleeding disorders.
Is cordyceps safe when breastfeeding?
Women who are pregnant or breastfeeding should avoid cordyceps.
Is this safe for children?
The safety of cordyceps has not been established in young children. It is generally safe for children above five years of age to consume cordyceps as a tonic. However, it is best to consult with your child’s pediatrician before starting any supplement.
Is cordyceps fine for those with autoimmunity?
Those who have auto-immune diseases such as MS, lupus, rheumatoid arthritis, or others, will have to make a choice on using or avoiding cordyceps. Some consider this to be boosting to the immune system. Others say it is regulating, therefore it would be helpful to an overactive immune system. Unfortunately, the evidence one way or the other is not crystal clear, so please consult your physician.


What other products can I take this with this product?
You can take Cordyceps with just about any other herb. You’ll find it combined with many other herbs inside of both our Hercules and Spartan formulas. (Note: that we currently use a different form of Cordyceps in those formulas, though we are currently working on reformulating them using this same Cordyceps militaris)