Home » Blog » Our Ant does NOT contain Sildenafil

When we started Lost Empire Herbs, Polyrhachis Ant was one of our earliest products. Ant is great in that it tends to give energy that many people can feel right away. It is known as one of the premier Qi tonics in Chinese medicine.

But it seems that people have used its reputation for these latter effects in shady and duplicitous ways. 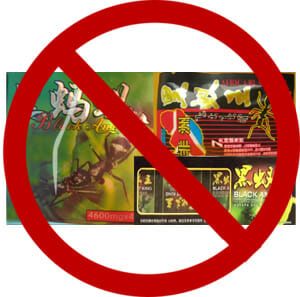 Ant Products that have been pulled from the market by the FDA for containing sexual drugs.

A customer of ours brought to our attention a warning from the FDA. Copied below is some of the text from that page.

[3/16/2011] The Food and Drug Administration (FDA) is advising consumers not to purchase or use “Black Ant,” a product for sexual enhancement sold on various websites.  Claims made for the product falsely state that it is a “natural sexual enhancer” and that it has “no known side effects.”

FDA laboratory analysis confirmed that Black Ant contains sildenafil, the active ingredient in the most popular ED drug, an FDA approved prescription drug for Erectile Dysfunction (ED).  The product tested had three times the starting dosage for the approved product.  Sildenafil may interact with nitrates found in some prescription drugs such as nitroglycerin and may lower blood pressure to dangerous levels.  Men with diabetes, high blood pressure, high cholesterol or heart disease often take nitrates.

Note: This notification is to inform the public of a growing trend of products marketed as dietary supplements or conventional foods with hidden drugs and chemicals.  These products are typically promoted for sexual enhancement, weight loss, and body building, and are often represented as being “all natural.”  FDA is unable to test and identify all products marketed as dietary supplements on the market that have potentially harmful hidden ingredients.  Consumers should exercise caution before purchasing any product in the above categories.

As much as the FDA and other government agencies are corrupted in many ways, the original intention of protecting the people is sometimes still present.

And on that note, a number of ant products have been pulled from the market for this very reason. They say its one thing but its really just a generic version of a drug.

When we saw this warning we figured that other people were doing that, but not our ant. Sure it had good effects but it didn’t give anyone who took it an uncontrollable hard-on. 😉

Still we wanted to be sure. So we sent our ant off to the lab…

Here’s the link to our independent lab testing for our polyrhachis ant extract.

Or I’ve copied the chart from there below: 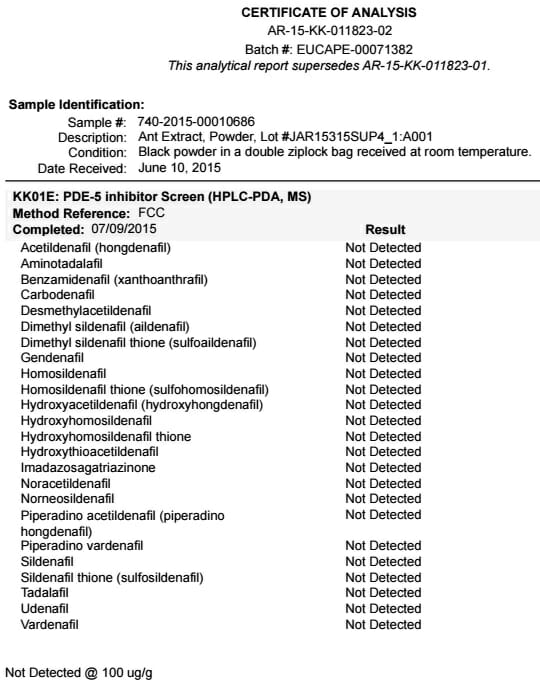 No surprise it came up negative for all forms of sildenafil and related compounds that are used as ED medications.

Yes, our ant extract is drug free. We keep to the natural stuff here at Lost Empire Herbs.

If you fortify and build your health the right way you won’t need drugs. 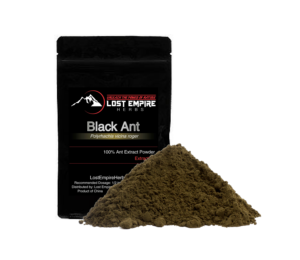