Quite a few customers have asked us about premature ejaculation. It’s about time I deliver an article on the subject.

What is premature ejaculation? It’s when a guy orgasms and ejaculates without even really getting to sex. Apparently, this is defined by a few different panels:

The International Classification of Diseases gives a smaller time from of 15 seconds from the beginning of sexual intercourse.

The Diagnostic and Statistical Manual of Mental Disorders (DSM-5) defines it as “A persistent or recurrent pattern of ejaculation occurring during partnered sexual activity within approximately 1 minute following vaginal penetration and before the person wishes it.”

The International Society for Sexual Medicine also says anything before one minute.

Even if it is not premature, many men wish that they could last longer, the average being 4-8 minutes. (Not to mention that most women also would like men to last longer.)

What is covered in this article may be useful in either case.

The causes of premature ejaculation are not exactly known.

It’s complex biology so many different causes are in play. Some mechanisms theorized in play are:

Geneticists, of course, are looking for a “gene” that is the cause of PE, but haven’t been able to find it.

Freud theorized that PE was caused by a neurosis of unconscious hostility towards women, though this is not a leading theory today.

One paper, Premature ejaculation: an update on definition and pathophysiology, listed all of the following as playing a possible role. 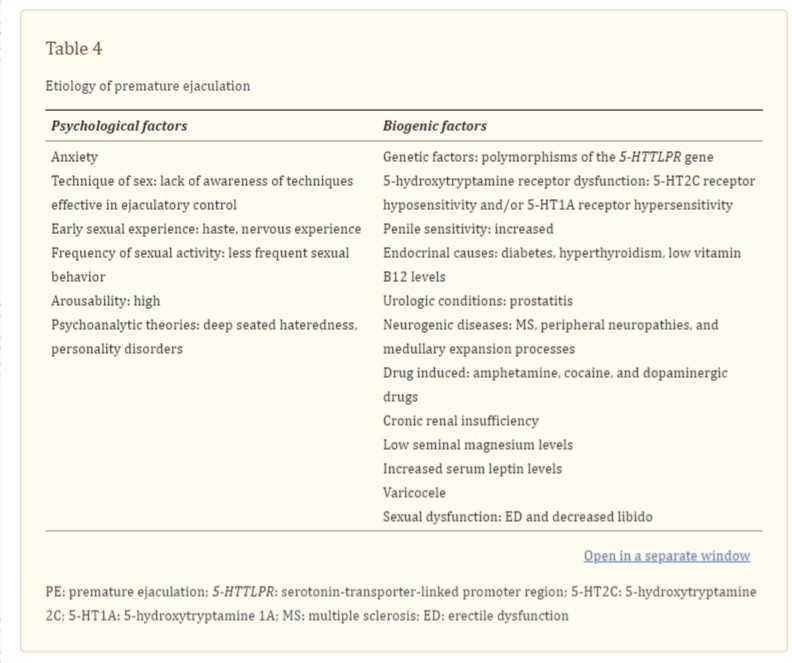 How to Treat Premature Ejaculation

There are a variety of methods that people employ. As in all things, different things will work for different people.

One systematic review looked at: 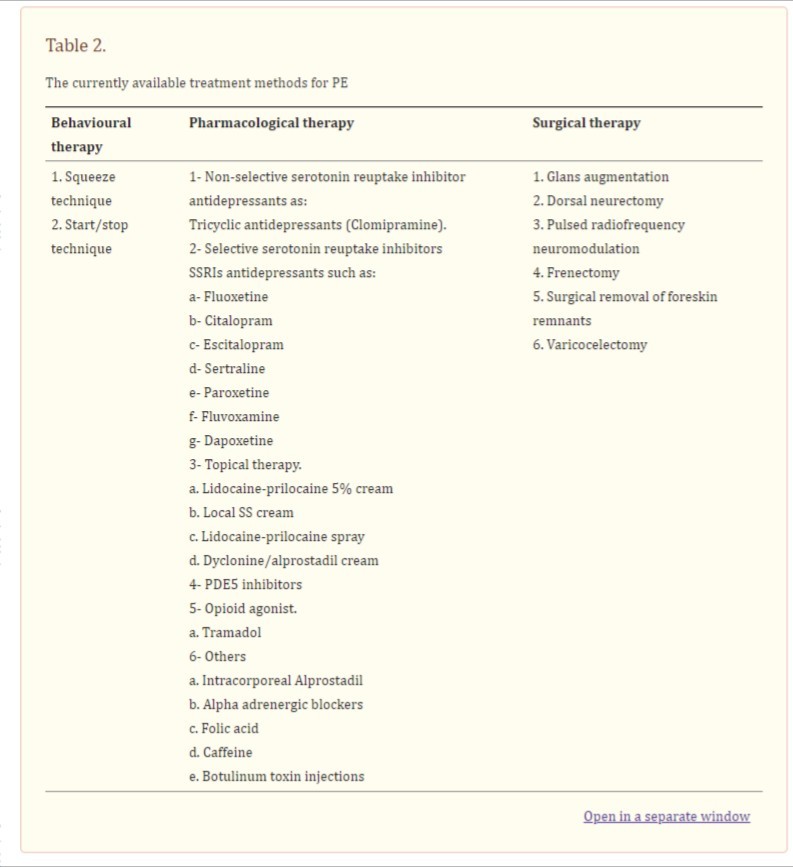 I would add more to the list, but let’s start with these options.

Of course doctors and scientists looked at those, due to the monopoly on medicine which comes along with considering premature ejaculation a disease and these being just about the only tools they have available.

(Please note that SSRI’s are used, those common serotonin-inhibiting drugs that are used to treat depression…because they have sexual side effects that can lead to less arousal and/or ability to orgasm!)

It is my philosophical opinion to recommend against such interventions, at least until many, many other options have been exhausted. The table above is far from complete in possibilities.

This review states, “The two most frequently used techniques in behavioural therapy are the ‘stop-and-start’ technique described by Semans in 1956, and the ‘squeeze’ method developed by Masters and Johnson in 1970. These techniques were proven to be effective in most cases…These techniques focus on distraction and reduction of sexual excitement or stimulation, which may reduce overall sexual satisfaction.”

Let’s take a step back and recognize what this means.

Your behavior, aka your actions, play a big role in ejaculation, whether premature or going for hours.

What this means is that your orgasm and ejaculation can be brought under your control. (Ejaculation and orgasm can even be separated from each other, but that’s a topic for another time.)

Some other forms of training include practicing kegel exercises, which help to strengthen the pelvic floor.

Bringing them under your control is not necessarily easy, but it is quite simple. In the start/stop technique, which from my experience works better than the squeeze technique, you practice getting close to orgasm and back off under control. This can be done by yourself or with a partner.

Again, this is not just for premature ejaculation. These sorts of technique can be done by anyone looking to last longer. I talk a bit more about this and lowering sexual recovery time including some recommended books on the topic in this post.

In the next article on the subject, I’ll cover how herbs can assist in premature ejaculation as well. I wanted to lay this foundation before going there, especially since the behavioral side of things is the most important.