A new study came across my desk.

This focuses on one of my favorite herbs, especially when you’re talking about it as a “nerve tonic and nootropic booster” as this study defines it.

For those that aren’t familiar with nootropic, it’s a fancy word that has to do with memory enhancement, better focus and the like.

This study looks at the reductive science in the many compounds inside Bacopa. Here are just a few of the names and molecular structures covered. 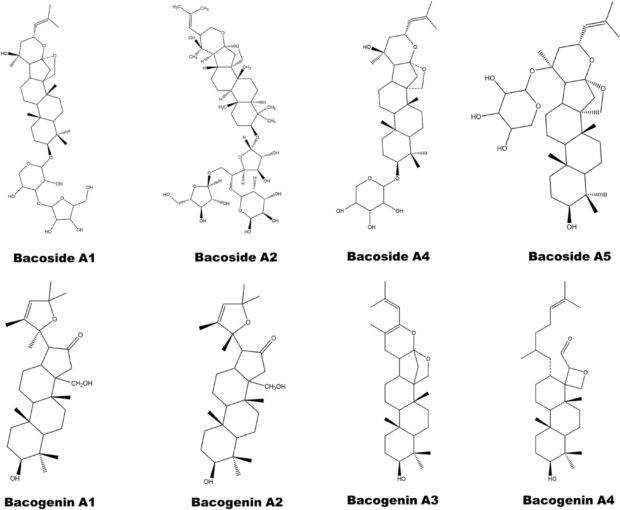 I counted 47 different molecules covered inside this study. But I won’t bore you with all their names.

For example, the bacosides, “improved the memory score by enhancing nitric oxide-mediated cerebral vasodilation, chelating iron, and increasing the concentration of [glutathione]“. Of course, this was just in rat brains so may not apply directly to humans.

Since there is strong evidence of aluminum toxicity being a causative factor in Alzheimer’s, that chelating iron stood out to me. I wonder if anything else might be chelated out of the brain? (Note this is just me theorizing, as this study doesn’t mention aluminum at all, it’s largely focused on the beta amyloid plaque theory, despite the fraud that went on there. As Kuhn covered, science takes a long while to change tracks.)

There’s plenty of other fun tidbits in this lengthy paper. Like with the bacopasides, not to be confused with the bacosides, one of which had the following results:

“The treatment of cultured neural progenitor cells (NPCs) with bacopaside I (20 µM) for 6 days significantly enhanced the proliferative activity of NPCs. That is responsible for neurogenesis in the hippocampus…”

I don’t know about you but I definitely want my neural progenitor cells being supported.

Now, I can’t legally comment on some of the disease models that are covered in this study…because only drugs can possibly treat disease.

But I can say that compounds inside Bacopa do have neuroprotective capabilities, that help in cases of neurodegeneration caused by neuroinflammation and neurotoxicity.

(How many times can you use neuro in a single sentence? Ha!)

So if you can imagine some places where that may take place, even beyond just aging, then you might grasp a picture of how this herb might help.

Not that I’m worried about that stuff. I simply take Bacopa on the regular because of how it effects my mind and I like that.

Read more about Bacopa and pick up a bag or two here.