There has not been much scientific work on pine pollen in the west. However, studies are beginning to show that the uses of it in Traditional Chinese Medicine for radiant vitality and slowing or reversing aging are not misleading. Stephan Harrod Buhner, a leading investigator on plant androgens, tells us that, “pine pollen is extremely high in androgens and the amino acids that support healthy endocrine function.”  This is a simple list of ingredients for pine pollen which l shall partially be expanded on below. 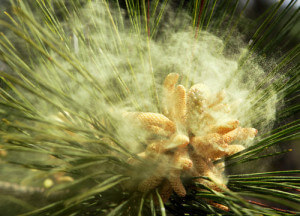 According to the research, the nutritious components are categorized into five groups:

(1) 20 kinds of amino acid, 8 of which are essential to the body.
(2) 14 kinds of vitamins.
(3) 30 kinds of mineral elements.
(4) About a hundred kinds of enzymes and active substances.
(5) Nucleic acids, fibrins, unsaturated fatty acids, flavonoids, choline, etc.

This will automatically make one come to the conclusion that more is better, hence mega dosing:

“Oral dosing in China runs from 5 to 10 grams per day, which, barring the problems of testosterone going through the GI tract, would give a comparatively high dose of testosterone every day.”
– ­Stephen Harrod Buhner

The massive doses recommended by Chinese Medicine makes sense when one sees the amount of nutrients involved. As for the testosterone making it through the GI tract, this is a problem best remedied by tinctures. However, tinctures cannot impart the totality of the dense food source that pollen is, so a combination of the two is highly advantageous for men that have started andropause (around 40) and up. As for women and children, taking the powder is the only way that this should be ingested.

A further note before looking at some nutrients, I commonly will throw the whole tablespoon in my mouth and slowly saturate it with saliva, this ensures some digestion off the bat and possible absorption of androgens into the bloodstream under the tongue. I then gulp it down with a mouthful of water and hopefully, the fact that pollen gets everywhere and sticks to everything, one can safely assume that it will do this in the esophagus. Androgens such as testosterone and DHEA can ONLY be absorbed into the bloodstream under the tongue or in the esophagus. They will not survive in the stomach.

One tablespoon approximates to 3 grams of pine pollen. To get 10 grams of pine pollen in an easy manner to remember, I will normally take one slightly heaping tablespoon first thing when I wake up, again around noon or after I work out, and then lastly before going to bed. This has worked well for me but there is nothing saying you can’t more precisely attempt to time it with the peaks of testosterone throughout the day.

Here are the amounts of amino acids as measured in Pinus montana, similar to Pinus massonia used in our pine pollen supplement:

Thus, while pine pollen will not give you the full dose of acids needed from day­ to­day, large doses of it will significantly supplement your normal intake of amino acids. This can only help to ensure your cells have all the building blocks needed during times of stress such as lack of sleep, physical training, or for proper hormonal control. As this list shows, of the essential amino acids, only one is missing methionine. This makes pine pollen a potent source with the ability of someone surviving entirely alone on it coming very close to being a possibility. On the flip side, certain studies have shown that restricting methionine consumption can increase lifespans in some animals (Miller).

As an aside, I wanted to mention arginine for the gentlemen reading this article. Arginine is a known human growth stimulator in sufficient doses. Supplementation with mega doses of pine pollen can help you regularly hit and stay at higher levels of arginine use by the system to enhance growth. Arginine is also a pre­cursor to nitric oxide, an important erection­ stimulant and strength building factor. You can’t go wrong with having a wholesome source of arginine in a bio­available form with all the needed co­factors in comparison to the chemical industries practice of isolating the acid.

A note on the Vitamin D content of pine pollen. Not only does pine have D2 and D3 in amounts between 0.1 and 3 micrograms but also possesses hydroxylated metabolites of D3. This is between 40 and 120 IU’s for those counting. Not a lot but every bit helps.

“(D3) plays an essential role in the regulation of intestinal calcium and phosphorus absorption, calcium mobilization from bones, and reabsorption of calcium and phosphorus in the kidneys.” Everyone knows how important vitamin D is to health, so having some extra in the diet is never really a bad thing because most everyone is deficit in these essential compounds (but please don’t depend on your diet to get sufficient quantities as it is rather difficult to do contrary to popular opinion ­ the sun is the best and healthiest way to ingest it).

There are an immense number of other constitutes. Many different minerals, for example, though I did not list them as I could not reliably make the conversions to milligrams with the information provided. A couple that are common to plants but are not largely studied between human interactions are:

Gibberellins – Structurally very similar to testosterone. These are basically plant steroids that jumpstart the first stages of germination. Spray them on growing buds and they will grow exponentially. They are found most in the buds and pollens of plants. They have been found to actually connect with testosterone receptors in the human body. Basically, they can mimic testosterone in the body and, as Stephan tells us, “because of their adrenal and pituitary actions, they stimulate androgen production in the body; energy levels increase.” They act as prostate regulators, up­-regulating when the prostate is too small (one study had castrated rats keep their prostates from shrinking) and down­ regulate when the prostate is too big and inflamed. They are also anti­cancerous and anti­-inflammatory in the rest of the body.

Brassinosteroids – Another essential element to plants, brassinosteroids are being used by plant growers as a “high efficient, broad-­spectrum, safely and multipurpose plant growth regulator…” Pine pollen contains many of the over 30 different kinds already identified. Two of the brassinosteroids in pine pollen are the mechanism through which the liver safely removes xenobiotic substances, such as xenoestrogens, from the body system. They have strong anti­viral actions and are, “considered to be highly novel steroidal compounds with unique anticancer actions while possessing very low toxicity.”

If you have already experienced some of the benefits of pine pollen at much smaller doses, just imagine how incredible you will feel when you start ingesting much higher amounts. All of us have been megadosing pine pollen as of late and we are blessedly fortunate to have the ability to do so. None of us can imagine not consuming pine pollen on the regular for the rest of our, what seems more and more, very long-­lasting natural lives. So megadose, because its natures supplement, a gift freely given by the pine trees to sustain us in exceedingly happy, healthy lives.

We also now have available a 250 gram container. This was created for mega-dosing with pine pollen as described on this page. In China, pine pollen is usually taken at doses of 5-10 grams per day for all the nutrition and healthful benefits it provides. At a dose of 10 grams a day (approximately 3 tablespoons) this supply will last 25 days. At five grams a day it would last 50 days. Of course, you can also order it as a stockpile with regular dosing, as its like buying four 50 gram bags and getting one free.

There are approximately 83 tablespoons per 250 gram container.