Also known as L-3,4-dihydroxyphenylalanine, L-DOPA is a chemical used in many functions of the human body (as well as in some plants and animals too).

It is best known as the direct precursor to the neurotransmitter dopamine.

Here are the amino acid precursors, L-Phenylalanine and L-Tyrosine, as well as the end products in this chain. As you can see L-DOPA is not just converted into dopamine but is also a precursor to norepinephrine and then epinephrine (aka noradrenaline and adrenaline).

Not pictured here, L-DOPA is also a precursor, several steps removed, from the skin color pigment melanin. There are several other conversions as well, but these are the most studied.

Besides being a precursor to some very important neurotransmitters and hormones, L-Dopa is also used by the brain and CNS to mediate neurotrophic factor release. Basically, it functions as a neurotransmitter on its own.1

A very important function of L-DOPA is that it crosses the blood-brain barrier, which dopamine cannot do. But L-DOPA can then be converted into dopamine, once inside the brain.

L-DOPA is used in the clinical treatment of Parkinson’s disease as it can greatly reduce symptoms.

L-DOPA is converted to dopamine via an enzyme, DOPA decarboxylase, that uses an active form of vitamin B6, pyridoxal phosphate, as a cofactor. For this reason B6 is often included in formulas along with L-DOPA or mucuna.

(A note on B6 – All foods contain small amounts of B6. However this may not be enough to reach even the RDI, let alone a more optimal level. The foods with the highest amounts include raw milk, eggs, meat, molasses, poultry, fish (especially salmon and herring), bell peppers, turnip greens, carrots, peas, walnuts, sunflower seeds, wheat germ, and spinach. B6 content is affected by light, heat and oxygen. Up to 70 percent of its content may be lost in the processing of food.)

As far as your own body converting L-Tyrosine to L-Dopa, iron is used.

In an interesting study, 40 healthy human subjects were given 100mg of L-DOPA or placebo and then studied by recalling pseudo-words they had learned.2 Pseudo-words are fake words, created for the purpose of studies like this.

Those taking L-DOPA were found to have greater speed, success and long-term retention of the words than those on placebo.

Those that were lighter, and thus received a higher dose in relation, performed better, showing effects were dose-dependent. 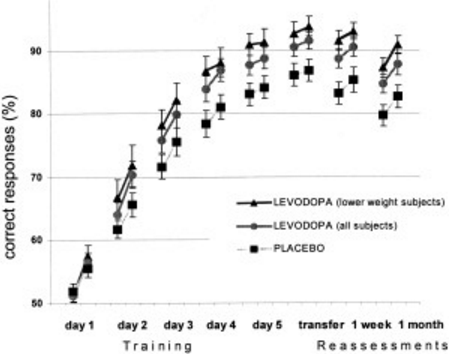 The effects of how L-DOPA and dopamine interact with the hormones in the body are not fully understood. Although we may know a fair amount on neurotransmitters and hormones, it is still relatively new that we’ve been able to study these areas.

That being said L-DOPA has been shown to increase growth hormone levels pretty significantly and consistently.3,4

There is likely some interaction with testosterone, though this doesn’t seem to be as conclusive. Dopamine plays a role there, so L-DOPA may be more indirect. Part of this appears to be that dopamine inhibits the hormone prolactin. Growth hormone also interacts with its androgenic brother in various ways.

Some research points to positive effects on testosterone.5 While others do not, including this study found that L-DOPA did not increase plasma testosterone levels in seven men.6

Actually, studies with mucuna, not just L-dopa seem to be even more positive in this light. This may be because synthetic L-DOPA isn’t as stable.

Dopamine is definitely a component of arousal, from the beginning to climax, at least in men. Less research has been done on women. L-DOPA’s role, beyond being dopamine’s precursor, is not fully clear.

Regarding this topic, Dr. William Wong told a humorous story, in this interview, of a Parkinson’s wing of a hospital where many of the patients were engaging in sex with each other.

Vision loss is common among the elderly. Yet an analysis done on those taking L-DOPA and those that were not , showed that L-DOPA may be protective against AMD and delay its onset. 7 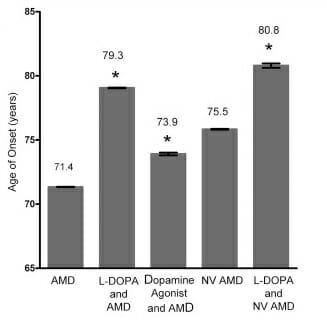 Mucuna is the most well-known and used source of this chemical found in nature. At Lost Empire Herbs we use a full spectrum extract, meaning it has everything in it in ratios found in nature. This is as opposed to a standardized extract where one constituent is isolated sometimes to the exclusion of others. But our mucuna pruriens extract is still quite high, at 15.76% L-DOPA content, thus a gram contains 157mg of L-DOPA. Other natural sources of L-DOPA that have been found include fava beans as well as some others in the bean and legume family.

People also appear to get resistant to chronic administration.

While these all seem to be the case with high dosages as used in medical treatment, to be on the safe side, we recommend cycling off for periods of time on the use of herbs like mucuna.

If you note any of the aforementioned side effects please lower the dose you use, or discontinue use of mucuna.