In Chinese philosophy, all things are considered as changing states of energy. This is confirmed by modern science, especially quantum physics. Even Einstein’s famous equation showed that energy is equal to mass (times the speed of light squared). As the paradigm of materialism comes down more people are looking at energy‘s effects in our everyday lives.

In Chinese Medicine are the concept of the Three Treasures, known as Jing, Qi and Shen. These definitions from Wikipedia give a few ideas of what these are all about.

The generally accepted English translation of each is the first word, but the others tell you more about them as well.

The best analogy to describe the three treasures is that of a candle. Jing is the body of the candle or the wax and the wick. This is the main component or the foundation for the rest. 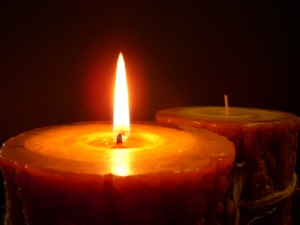 The candle analogy is one of the best ways to understand jing, qi and shen.

In The Healing Promise of Qi, Roger Jahnke discusses jing and says its “equivalent to neurotransmitters, hormones, DNA, sperm and the egg.”

Jing can be divided into a few categories. There is the concept of prenatal or original jing. This is the essence or constitution passed onto you by your parents (and their parents, so on through your ancestry). Some people believe that you have a limited amount of jing. You must guard this and not deplete it through a harsh lifestyle.

Others believe that Jing can not just be protected, but restored and built up through practices like Qi Gong and taking herbs rich in jing like He Shou Wu and Shilajit. This jing is called postnatal jing to distinguish it from your original amount. Jing can also be divided into yin and yang but that’s another subject that we’ll discuss later.

Jing helps to determine your life span and the vitality you have during life. The concept of prenatal Jing is in line with research showing how healthy your parents are plays a big role in your constitution. (See Deep Nutrition, The Better Baby Book and more.)

Back to the candle, qi is the flame. This is the energy in action. Note that without the candle (jing) you can’t have the flame (qi). Once the candle is melted away completely (jing is depleted) than the flame goes away (death). It is for this reason that jing is also called the superior ultimate treasure.

As discussed in a recent article, qi also governs the blood. Polyrhachis ant is the most powerful of qi tonics. Soon we’ll also be carrying more qi tonics like Eleuthero and Rhodiola rosea.

The light given off by the candle is the Shen. You could say that this is the purpose of the candle, to illuminate, and such is our shen. But you can’t cast off the light in a big way or for a long time without both a foundation of jing and qi.

Shen is not just the spirit but has to do with our mind and consciousness. Different herbs like wild Reishi can enhance your shen, while others serve to stabilize shen and our emotions.

Interactions of the Three Treasures

“When we develop jing, we get a large amount of qi, automatically. When we have a large amount of Qi, we will also have strong shen, and we will become bright and glowing as a holy man.” – Daoist Master Sung Jin Park

Thus, you see the importance of starting with jing. This is the primary three treasure effect of Phoenix Formula, although it helps with qi as well.

And here’s a few more related ones: