Interested in the many uses, benefits and beneficial properties of Cordyceps militaris mushrooms?

You’ve come to the right place!

Scientists state that the vegetable portion of the parasite fungus is found at high elevations. Cordyceps Militaris is harvested in the end of summer and beginning of autumn. Before the fungus is used for various therapeutic purposes, it must be cleaned and dried.  Chinese herbalists’ state that dried Cordyceps Militaris has many promising health benefits that can be used against cancer and aging. 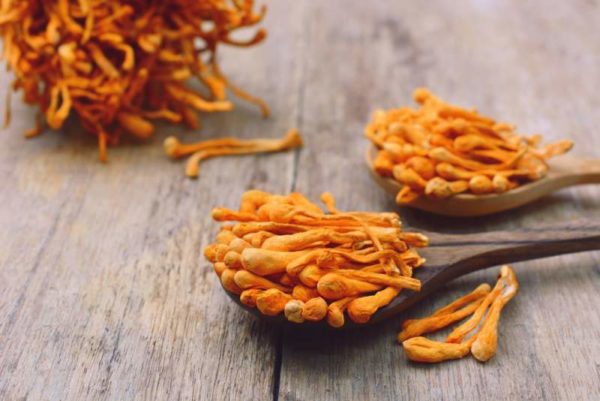 Cordyceps mushroom is viewed as an unusual and powerful mushroom that develops where the fresh air stages and temperatures are lower in the higher heights. These unique mushrooms might improve the function of the organs, specifically and the general strength of the body.

As per the Chinese claims, this special mushroom was discovered in the Tibet (mountains of Himalayas). It was known as the energy tonic, in its tinctured form.

As per new biological and pharmacological studies, Cordyceps is effective in treating hepatic, cardiovascular, and renal diseases. However, clinical trials are still running in volunteer athletes. Cordyceps Is Used to Treat Following Conditions:

The list of Cordyceps Militaris uses would remain incomplete without its hand-in-help during anti-cancer treatments. Japanese researchers proved that Cordyceps Militaris extracts can be used to eradicate the power and presence of cancerous cells. When tested on laboratory mice with cancer cells, the medicinal mushroom produced positive results. The extract inhibited the cancer cells and healed the mice. Moreover, the herbal extract possesses properties which boosts the immune system to stand against these harmful cells.

Next in line would be Cordyceps Militaris’ anti-aging properties. Research that was done in the University of California proved that the herbal extract may prevent aging by 75%. When compared with the use of healthy diet plans and powerful workout routines, Cordyceps Militaris has the power to protect the body’s freshness and active nature. The Journal of Alternative and Complementary medicine proved this statement. It stresses the fact that Cordyceps Militaris is a natural extract without any side effects. Moreover, it is extremely difficult to find an herbal extract that works for everyone.

Another interesting but less known use of Cordyceps Militaris would be its anti-diabetic properties. Research done by Egyptian Pharmacologists ascertained the herb’s anti-diabetic features. The herb works by increasing the amount of serum insulin in the body, thus helping it to resist diabetes. Moreover, it triggers the growth of high-density lipoprotein, beta cells, antioxidants and pancreatic glutathione. These are important elements that fight against diabetics. When compared to drugs like glibenclamide, Cordyceps Militaris and taurine are believed to be a lot more powerful. The herbal extract reduces the body’s resistance against insulin naturally.

I scoured Youtube for some of the best Cordyceps videos I could find, that showcase the amazing properties of this fungus. The name Cordyceps comes from the Latin root words, “cord” and “ceps,” meaning, “club” and “head,”

This video originally from the Planet Earth series shows a species of Cordyceps in action as it sprouts from a bullet ant. As the video states, there are thousands of variations (others say only hundreds) which each specialize in one species. In the video, you get to see several insects sprouting Cordyceps fungus after being infected. Some may find this off-putting, but others will see the almost magical nature of the world in it.

This second video shows the genuine Cordyceps sinensis, how it is harvested and sold in the markets for large prices, being worth more than four times its weight in silver. You’ll also hear its nick-name of “Summer grass winter worm”.

This video below featuring mycologist Paul Stamets shows that insects aren’t the only host for Cordyceps. Here the fungus, which he calls Cordyceps capitata, takes over a truffle.

Cordyceps are actually from all over the world. Here is a variety of Cordyceps that has attacked a beetle in Ecuador.

It is likely that most species of Cordyceps would contribute health-giving effects to humans who consume them, but that is just a guess at best. Only a few varieties have been studied. The “king” of Cordyceps is Sinensis, the original from the Himalaya mountains, only seen in the second video here.

Our Cordyceps sinensis is the only mycellium grown cordyceps proven to have a DNA match with those found in the wild, unlike many imposters.

Side Effects, Safety and Complications

Cordyceps Mushroom is potentially safe when taken as the supplement. However, pregnant and breast feeding mothers should avoid this, as there is no reliable information available regarding the safety of pregnant Women. So it is better to avoid certain situations. People with autoimmune disorders should also ignore this herbal remedy; rheumatoid arthritis, lupus, multiple sclerosis, and other conditions. Cordyceps is not safe for people who are suffering from bleeding disorders. If you are planning to undergo a surgery, it is better to stop using Cordyceps at least 15 days before the operation.

You may be surprised to know that many medical doctors use these fungi as a co-treatment (using more than one agent for a treatment), when dealing with chronic disorders and diseases. Elderly fatigue, heart failure, cerebrovascular disease, respiratory and cardiovascular diseases are a few examples of co-treatment.

These specialists are using it because they know its benefits, properties and uses and they also know that it can turn into an effective treatment for many health problems. However, this doesn’t mean that you should start taking this without consulting an herbalist or a specialist. If you are suffering from any disorder or disease, you should consult your specialist before starting the course of Cordyceps.