We’re coming towards the end of the formulation series. Today I dive into… 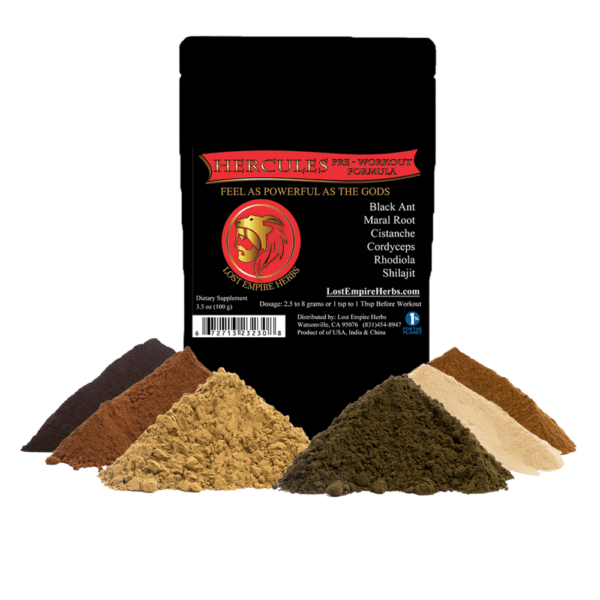 This one is interesting because it’s gone through some changes over the years.

I started working on this formula after experimenting with a few commercially available pre-workout formulas out there. Some of them had nice effects in the gym, but I definitely didn’t like the artificial flavors and colors in, well, pretty much all of them.

Some had too much caffeine. Others made you, well, weird.

The original version of Hercules was Ant Extract, Cistanche and Maral Root along with a little bit of Niacin (vitamin B3).

Cistanche and Maral are Jing Herbs, yang and yin respectively. As covered previously, Ant is the top Qi herb.

At the time I was mostly doing some very heavy lifting in my training and this worked really well for that.

My brother Cloud, as well as many of the other athletes we talked too, were focused a bit more on Endurance. That’s where Rhodiola, Cordyceps and Shilajit came in. These are all Qi herbs, though with some Jing as well.

The Shilajit also acts as a potentiator, so the niacin wasn’t needed so much.

We actually sold two different versions of Hercules for a while. But in the end, we decided we only wanted to use herbal ingredients, no isolated extracts at all, so we stopped using Niacin and simplified it down to one formula.

Many people get great results using Phoenix Formula or Spartan Formula as pre-workouts. You’ll notice that they have some of the same ingredients in each so it’s not surprising at all.

But I consider this the best to cover all bases for strength, for endurance, and even the mental focus you need during a hard workout, match or game.

It is not very balanced. It’s extremely yang, but then again that is what you want in athletics and for hard work ahead.

That being said many of these herbs are going to be supporting to recovery and adaptation afterwards too. It’s not just energy to train. There is some yin going on too, it’s just more in the background, as yin itself is.

But the taste leaves something to be desired. I often recommend mixing it with either Beet Juice Powder and/or Goji Powder to make it more palatable (as well as the additional pre-workout effects those bring too).

All these reasons and more are why there is some top praise for Hercules the original herbal pre-workout formula.

“Great pre workout with all real ingredients. No fillers and no junk”
– Donald Malec

“Definitely gives me the energy I need for endurance training.”
– Ryan Amrish

“I have used the product, it really works. I’m 45 years of age, and this product is amazing. I lift more when I take Hercules!”
– Shedree Woods

It certainly won’t take the place of doing the work, but you might be surprised at your performance when you take this before a workout. Give it a try and see how it works for you.