In a recent article, I dove deep into the horrors of BPA found in many plastics. As mentioned there, BPA-free plastics are not necessarily any better. Here youâll see why that is.

While eliminating BPA from many plastics is a good thing, it is not the complete picture. Far from it.

BPA is the hot kid on the scene that is getting popular. We (aka human beings in general) get our hooks on one thing and think that is everything.

Other Bisphenols are Just as Bad

Once the shit hit the fan with BPA, most plastic manufacturers simply replaced it with Bisphenol S (BPS), Bisphenol F (BPF) or the bunch of other bisphenols. Wikipedia lists 14 other types. As you can imagine, there arenât a lot of differences here.

A review of the research on the two new most common of these states:

âWe identified the body of literature-to-date, consisting of 32 studies (25 in vitro only,and seven in vivo). The majority of these studies examined the hormonal activities of BPS and BPF and found their potency to be in the same order of magnitude and of similar action to BPA (estrogenic, anti-estrogenic, androgenic, and anti-androgenic) in vitro and in vivoâ¦ BPS and BPF are as hormonally active as BPA, and have endocrine disrupting effectsâ [1]

If you remember in the previous article we talked about how thermal paper, what sales receipts are made of, have BPA which can readily enter your skin. Some people have taken note and switched to BPA-free receipts. Unfortunately, these are made with BPS instead.

BPS and BPF are found in food containers and thus foods themselves. Theyâre also in skin care products, in water and in indoor dust. BPF has been found in 55% of human urine sampled, and BPS in 78%. Meanwhile BPA was found in 95% of samples. These replacements seem to need some time to catch-up.

The FDA finally banned BPA from baby bottles and sippy cups in 2012, but not from any other product. Was this really a win?

Plastics testing company CertiChem looked at 455 products. 72% of them, including those that were BPA-free, leached xeno-estrogenic chemicals. [2] They wrote:

âAlmost all commercially available plastic products we sampledâindependent of the type of resin, product, or retail sourceâleached chemicals having reliably detectable EA [estrogenic activity], including those advertised as BPA free. In some cases, BPA-free products released chemicals having more EA than did BPA-containing products.â

This included the fact that EVERY type of plastic used in food packaging was estrogenic.

That means the baby bottles and sippy cups are just as poisonous to developing infants.

All of this is covered up by industry-led (*cough* bought) âscienceâ to say no it isnât a problem.

Why Bisphenols are a Big, Hidden Problem

Most people…and that means companies too…are not aware these were simply replaced. Until I stumbled on this research I had no clue.

Here’s a personal example. Years ago, I made the choice to buy the more expensive organic coconut milk from brands that said BPA-free because of my awareness of it’s dangers.

Thai Kitchen, probably the most popular brand,Â does not advertise that it’s cans were BPA-free so they were out.

I noticed two other brands did have BPA-free. But what about the other bisphenols? While writing this article I dug deeper. 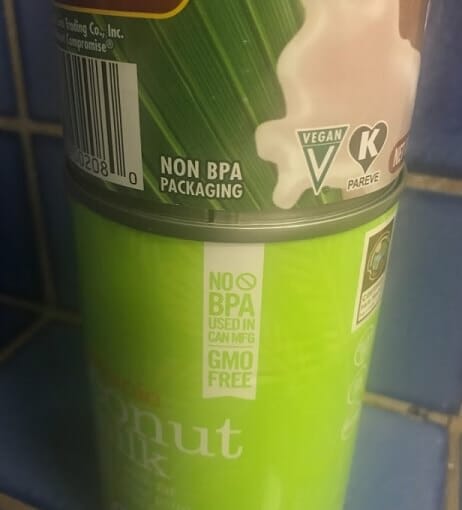 BPA Free Cans from Native Forest and Natural Value, but what about the other Bisphenols…

Native Forest – From their website, “We direct our packing facilities to select cans with no detectable levels of BPA. While some packaging suppliers offer what they describe as BPA-free cans, we perform independent tests to validate their claims.”

That’s great, that they do independent testing, but they make no mention of BPS, BPF or any other bisphenols. Therefore…who knows? The owners of that company probably aren’t aware of this research.

Natural Value – From their website, “Please be advised none of the alternative coatings to BPA-based epoxy coatings from [Our can supplier] are formulated with BPF, BPS or any other structural analog to BPA.”

To be honest I was surprised! This is the first time I’ve even see other bisphenols mentioned by any food company. Sure, it’s tucked away deep on the website, but that’s great news!

So moving forward, when I buy coconut milk I know who I am going with.

But the bisphenols arenât the only issue with plastics. Then you haveâ¦

Phthalates are used as platicizers, things that make plastics more flexible, transparent, durable and longer lasting, most notably in various types of PVC. One of the most common, as measured in blood or urine, is di(2-ethylhexyl) phthalate (DEHP).

Back in 2008, Congress passed a law banning six types of phthalates in children’s products. However, these phthalates are still in use elsewhere. And, just like the biphenols, there are other phthalates in use.

Unlike many others, these chemicals are not specifically estrogenic, but instead are directly anti-androgenic, suppressing the creation of the androgenic hormones like testosterone. [3]

In a recent study pthalates were linked to 20% reduction in male fertility in humans. [4]

A review found that, âStudies in human and animal populations suggest a correlation between phthalate exposure and adverse health outcomes, particularly at the reproductive and cardiovascular systems.â [5]

Overall, there is quite a bit less research on these then BPA, but there is enough to warrant action. âEpidemiological and in vitro studies generally converge sufficiently to conclude that phthalate anti-androgenicity is plausible in adult men.â [6]

Phthalates are even connected to autism.[7]

Once again, these things donât just affect babies and children. They affect you.

Weâre not done. There are other endocrine disrupting chemicals in plastics besides bisphenols and phthalates. Some of them contain flame retardants like polybrominated diphenyl ethers (PBDEâs) or other similar chemicals.

In the USA, chemicals are deemed safe until proven otherwise. This policy is responsible for what we have just covered. Unfortunately, despite the fact that weâre screwing the environment and ourselves up, itâs not likely to change anytime soon.

And that’s the things we know about. Who knows about the things that are inside plastics and other goods that we’re not even aware of.

What You Can Do with Plastics

This makes me angry because it is hard on all of us.

Here’s another food product I had on hand while writing this article. Some great fermented kim chi by Sinto Gourmet! 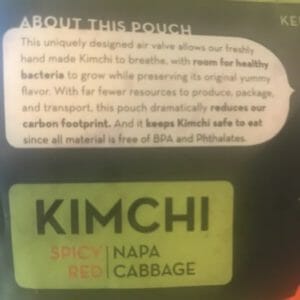 If you can’t read that it says, “With far fewer resources to produce, package and transport, this pouch dramaticallyÂ reduces our carbon footprint. And itÂ keeps Kimpchi safe to eat since all material is free of BPA and Phthalates.”

The good news is they are BPA and phthalate free. The bad news is still leaves room for error. I contacted them via their website since they do not have the topic written about there. As of yet I have not heard back.

I get it, it’s harder to ship. The energy that goes into producing and shipping things is a factor. But personally, I wish this came in glass instead. Chances are if I see options, other brands in the store that do come in glass I will get them instead. Or perhaps I just need to get back to making my own sauerkraut and kim chi.

InÂ Slow Death By Rubber Duck, by Rick Smith and Bruce Lourie, they also talk about the dangers of phthlates, along with many other chemicals. He describes another case of the difficulties we have in making buying choices.

“During the writing of this chapter, I took a late-night run to our local supermarket for a handful of items for the kids: milk, bananas, ketchup…I stood blinking-staring-at the ketchup selection, honestly perplexed.

What to do? The two choices that were either lower in pesticides, or, by virtue of being local, easier on the carbon emissions, were undoubtedly higher in plasticizer chemicals…I was suffering from ketchup-option paralysis.”

I point you back to the BPA article that has a list of things you can take action on. Short answer is avoid ALL plastics as much as possible, but even then you have difficulties like these.

Like with our herbs. Shipping your jars would increase cost and breakage so its not a great solution, so it’s plastic bags for now, though we’re working on better solutions. But the herbs themselves are a better option than no herb, even if it is housed in plastic. Still we recommend you move them into a jar once they arrive at your home.

The other thing is to make sure your body is in great shape to detox these chemicals since we can’t completely avoid them. As covered in the previous article, the steps to that include:

They say “Ignorance is bliss.” While these facts may be scary I would rather know about these things than not, and I hope you feel the same way too.

Follow me
Logan Christopher
CEO at Lost Empire Herbs
Logan Christopher is co-founder and CEO of Lost Empire Herbs, which aims to bring performance herbalism into everyday peopleâs lives. He started studying plants and fungi as a result of his interest in peak performance and strength training. This includes performing feats of strength such as pulling an 8,800 lb. firetruck by his hair, supporting half a ton on top of himself in a wrestlerâs bridge position, and routinely ripping decks of cards in half with his bare hands. After visiting the Amazon rainforest, he received a calling to be an âEmissary of Natureâ and thus bring humankind back into alignment with nature for health and well-being. You can read more about this in his book Powered By Nature.