Recently Black Ant Extract was featured on the Joe Rogan Experience podcast and Lost Empire Herbs was mentioned. In fact, it started off that way…
“Ben Greenfield eats ants. I just wanted everybody to know,” says Joe Rogan.

There was some talk about the benefits of Black Ant Extract while Rogan remained skeptical. I get that. On the surface, it does sound weird.

So why does ant extract work?

Well, as for herbs (using the broad definition since ants are in the animal kingdom) it tends to be one that many people can feel. It gives energy which makes it great for working out by itself or in combination with other herbs like in Hercules Pre-Workout Formula.

The fact is we don’t really know WHY it works. It’s not large amounts of zinc as some have claimed (we use to believe those claims until we tested it for ourselves). They have some zinc but not a great amount.

It’s not large amounts of B vitamins. Again, we tested our ant extract and found it has some of all the B vitamins, but not supplemental amounts.

There are supposed to be novel Aldehyde compounds such as Geranic Aldehyde (C10H16O) and Formaldehyde (HCHO, C10H14O), as well as others. Thus far, we have not tested for these. The theory is that it may be these that give the extract its energy enhancing and increased Qi action.

Ben Greenfield mentions the doctrine of signatures. While many denigrate this idea it certainly has some use. In this case, ants are really strong and able to carry somewhere around 100 times their bodyweight. And in a very odd research study ants necks were capable of withstanding 5,000 times their bodyweight in centrifugal force before it ripped their heads off. (Honestly, this was studied! Read more here:  https://www.jbiomech.com/article/S0021-9290(13)00545-9/abstract )

Ben Greenfield is a biohacker and endurance athlete. And I was interviewed a while back for one of his podcasts which you can view here: https://bengreenfieldfitness.com/article/nutrition-articles/logan-christopher-and-the-superman-herbs-podcast/

So, the idea is that ants are strong…and by consuming them you’ll become stronger.

Anyway, we’ve sent Ben Greenfield a few of our herbs over the years. Recently he’s been doing an experiment with our Shatavari and Triphala.

That being said, our Black Ant Extract was one of his favorites that he tried. Just recently, I sent him a bottle of Ant Tincture that I had handcrafted. (Sorry this is not available even for VIP members at this time, but our regular powdered Black Ant Extract is.) Since he liked the powder, I thought he’d like to try the tincture. 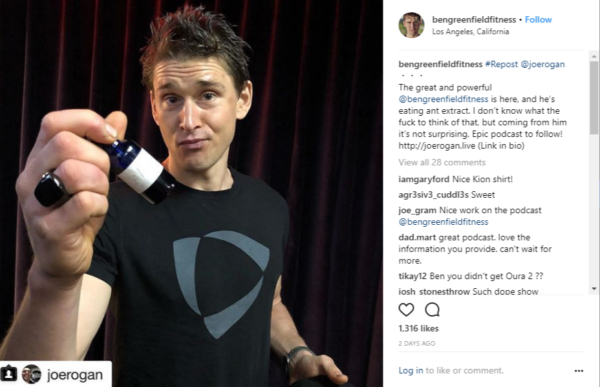 The science around consuming ants is non-existent. That doesn’t mean it doesn’t work. As I heard from a scientist friend of mine, lack of evidence is not the same thing as evidence of lack. And that is important to understand.  Ant extract was one of the original supplements we offered here at Lost Empire Herbs and it’s still going strong all these years later.

Try it for yourself and see what the buzz is about.