Home » Blog » All About Ghee

This is the first in a series of articles all about ghee. Here we cover the basics of what it is, how it’s been used in Ayurveda, and the research around it. In later articles, we’ll show you how to make it, and the combination of herbs with ghee.

For those unfamiliar with ghee, it is also known as clarified butter. 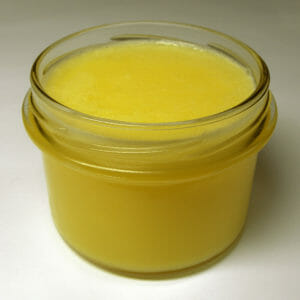 Ghee came from India where it is highly revered, just as they revere the cows it comes from. It is widely used not only in India but South Asia and the Middle East as well. In the West, in certain diets, it has gained significant popularity.

Butter is heated to remove the leftover proteins (as well as water), leaving almost pure fat. Actually, there are several different methods of making it that may include starting from raw milk, the use of fermentation, and other methods.

Being mostly a saturated fat, it is solid at room temperature. Its typical make-up is about:

The small amount of polyunsaturated fats does include long chain omega-fatty acids like DHA.

Of course, this all depends on the health of the cows it comes from in the first place. Healthy cows eating healthy grass will make health ghee. Unhealthy cows eating grain and loaded up on hormones and antibiotics will not make such healthy ghee.

Note also that vegetable ghee is also sometimes used, or added to the real stuff. This is basically margarine and should be avoided at all costs. Because it was cheaper this alliteration occurred widely throughout India, though now it is illegal.

Because the sugars and proteins are removed from the milk many people that have problems consuming dairy, can successfully use ghee. There is no lactose, which is the milk sugar, that many people can’t digest. Also, the proteins, whey, and casein are removed, which other people have allergies or sensitivities too. While only small amounts of these are in butter, there is virtually none in properly made ghee.

Being mostly saturated fat, ghee is an excellent option to cook with. Its smoke point is 450 degrees Fahrenheit (232 degrees Celsius).

In Ayurvedic medicine, ghee is widely used. Specifically, it is most indicated for the pitta dosha. However, it is tridoshic, working on all the doshas positively. It possesses anti-vata, anti-pitta, and anti-kapha properties. But it is recommended to be used in smaller quantities by Kaphas, as it is oily in nature.

It is considered to enhance Ojas, which is roughly the Ayurvedic equivalent of the Chinese Jing. Ghee is used as an appetizer, or added to foods, as it stimulates agni, the digestive fire.

Virtually every text on Ayurveda will contain something about the miraculous oil.

Ghee enhances Ojas, the subtle essence of all tissues. It increases Agni (and all the agnis), and all digestive energies and enzymes of the body. It promotes jatharagni, the digestive fire dwelling in the small intestine, increasing its capacity without aggravating Pitta. It promotes the bhutagnis, the elemental fires which dwell in the liver and govern the transformation of food in the body. It does not clog the liver, as do other oils and fats, but strengthens it. It is food for majja-dhatu, bone marrow and nerve tissue, and feeds the brain. Promoting Ojas, ghee promotes all the subtle tissues of the body, including shukra-dhatu, the reproductive tissues. Through Ojas it gives sustenance to Tejas, the fire of the mind, and thus promotes medhagni, the flame of intelligence and perceptions. As such, it is an important rejuvenative tonic or rasayana for the mind, the brain and the nervous system. It is good for Vata and Pitta doshas.
– Dr. David Frawley and Dr. Vasant Lad in The Yoga of Herbs [1]

Ghee is lauded for sexual vitality and for building nerve and brain tissue. Long a favorite of yoga practitioners, it lubricates the connective tissues and promotes flexibility.
– The Way of Ayurvedic Herbs by Karta Purkh Singh Khalsa & Michael Tierra [2]

Ghee is not only consumed but used extensively on the body.

It is important to note that India is a place where people have long been practicing vegetarianism. Because of that, this pure animal food which contains vitamins and saturated fats, is crucial to fill in the gaps. In a way, ghee is the essence of a cow, which allows it to work on the essence of the body.

Of course, it being a butter product, most of the research around it has had to do with cholesterol levels and coronary artery disease. There is little research on humans though there is some, most of it being done on rats and other mammals.

In what follows, I have selected a few quotes from various studies I came across, along with some comments about them.

“A study on a rural population in India revealed a significantly lower prevalence of coronary heart disease in men who consumed higher amounts of ghee.” [3]

On rabbits, the following was found:

Here we have a human trial where ghee was measured against other oils. They concluded:

TG is triglycerides and is actually a much better marker to look at for arterial health than cholesterol. Meanwhile, HDL is what is typically called the good cholesterol, thus higher levels of this is generally a good thing.

As you can see in a lot of these studies they compare ghee to other oils. In the following one, it was compared to soybean oil in rats.

Contrary to the fallacy that vegetable oils are good for you, here almost pure saturated fat in the form of ghee is shown to help reduce cancer, by improving how the liver handles carcinogens and detoxifies them from the body. Remember how in Ayurveda, long before Pubmed was around, they described it as supporting the liver.

Another fascinating study I came across looked at the reproductive harm of BPA (bisphenol A, which is covered in horrifying detail in an article here), and if butterfat could help blunt the harm. It did!

“This study reveals the implantation disruptive effects of maternal exposure to an environmentally relevant dose of BPA and identifies HBF diet as a modifier of BPA in promoting early embryonic health.” [7]

Remember, the earlier study that showed liver detoxification improved, which is likely at least one method in which this occurred.

As mentioned, ghee can also be used topically. In the following study it was combined with honey and used to dress various wounds, and it worked well in doing so.

“In view of our results, as also result of innumerable Randomized Control Trials (RCTs) reported on honey dressing for infected wounds, there is substantial evidence that ghee and honey dressing has at least comparable results to other modes of treatment. The easy availability and low cost of this treatment makes it significant in developing countries.” [8]

These were just a few of the highlights I saw from my reviews of the research around ghee.

Much more in our series all about ghee coming soon…